Vol Biv in the Himalayas


After the tour this year Steve Pieniak and I planned on doing a bit of flying together. No real set plan just a bunch of ideas of possible flights coupled with the idea that we wanted to fly out, top land some mountains, camp out and fly off the next day. After everyone left we had a few days of OK weather where we did some SIV and flew locally around the valley, then it rained and we lost a day with no flying. As the rain departed the atmosphere was scrubbed clear and we were rewarded with a crystal clear view of the Himalayas. Normally when this happens we get a series of kick ass flying days so we pack some food, some water and a sleeping bag each and we set off into the mountains to fly with no real destination in mind.
With clear skies, beautiful mountain views and the thought of some bivy flying it didn't take much convincing to get Brad Sander to join us on our little adventure. On the 17th of Feb the 3 of us launched from Sarangkot and headed north to the big mountains. Crossing the Seti river we flew to the Greenwall climbing to around 2300meters, from there we headed west towards Korchon and a thermal we call the "hand of God", continuing further west to the Dhampus Greenwall we decided to search around for a top landing high enough on the mountain so we could get an early start the following day. After about 20 minutes of looking we found a nice SE facing grassy terrace at 1800meters where we all top landed within 50 feet of one another. That night we enjoyed the hospitality of the locals who bought us Chia (Nepali tea) warm glasses of Buffalo milk and some Dhal Bart (rice and lentils). Brad and I slept in our sleeping bags covered by our gliders and enjoyed a warm good night’s sleep. Steve tested out his warm flight suit theory after finding his new sleeping bag was to small and froze getting no sleep.
On the morning of the 18th we woke to the most amazing view of the Himalayas, a fire and warm buffalo milk. That day we flew north in a direction none of us had flown before and pushed around a huge SW facing bowl that was in the shade. Following Brads lead both Steve and I were amazed to find smooth dynamic lift that took us to 3000meters. Crossing a N-S facing spine we flew over to the sunny side of the ridge playing with and avoiding some small cumulus clouds that were forming beneath us. From there we flew back to Pokhara to restock with supplies, a new sleeping bag for Steve and formulate a new plan to take advantage of the nice weather and clear skies.

Stocked with food, water and a new sleeping bag our new plan was to travel by jeep to Sirkot 32 km south of Pokhara the following morning and fly from there to Kathmandu approximately 150km over 3 days and 2 night. Arriving at Sirkot on the morning of the 19th the day looked good but the base low. Potentially to low for guaranteed transitions. So for the first few climbs we all took turns at stuffing ourselves in the clouds for a couple of hundred meters before gliding north. This worked great and by the time we were on the 3 climb base had lifted and we didn't need to push into the clouds.
Flying past Pokhara the conditions continued to improve but it began to OD to the north so we landed just past our goal in a good position for the following day. Again we all landed safely in the same spot on top of a mountain. Perfect!

After we packed our gliders and savored a warm can of Heineken we collected fire wood and enjoyed a the hospitality of Meem Gurung who’s land we landed on. Meem lives there with his wife and one son. They only have to go to town once every couple of mouths to buy salt, oil and soap. Everything else they produce themselves. After a warm night’s sleep under our gliders we again woke to a breathtaking view of the Himal, and a warm cup of Chia brought to us in bed by Meems wife as the sun broke the horizon.

The day of the 20th the sky looked good and the clouds began to form early. Starting early and moving through the sky fairly efficiently we past our goal for the day at around 1pm, flying another 40km past our goal we found another great place to land this time at 2200meters again we all top landed safely together around 3:30pm.

More than 75 km to the east of where we slept the night before we were rewarded the following morning with a fantastic view of the Garnesh Range of the Himal a section I had never seen before. Unfortunately within an hour of sunrise our route in front of us began to OD. Again we launched early this time to try and beat the over development but it shut us down about 12 km into the flight and 20km short of our goal. From there we glided back to wide valley and landed safely before the thunder started.

This is only a very brief description of our adventure but the highlights for me were the interactions we had with the people that lived in the mountains, the fact that all three nights we were all able to land, sleep and relaunch from exactly the same spot and the fact that there is always next year to try it again. 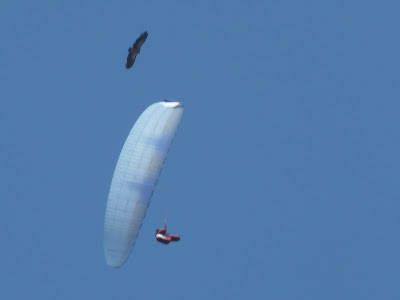 Great write up and awesome flights and photos Mstty!

Great Adventure - Thanks for posting

Great Adventure - Thanks for sharing

Beth and I are so fortunate that we had the opportunity to go to Nepal with you last year. I can just feel and see and imagine the places you flew over.

Wow - so this is the "vol biv isn't always as easy as this" trip that you mentioned! Sounds fantastic, great write up!

Treks in Himalayas in India said...

the Himalayas, home of the snow, is the most impressive system of mountains on the earth, and for centuries the setting for epic feats of exploration and mountain climbing / Treks in Himalayas in India
, are a world into themselves. Ascending the heights and being a part of the Himalayan landscape is an experience beyond comparison.