The warmer west side was sucking colder air from the east side of the Cascades like an out of control giant shop vac, the easterlies howling down Snoqualmie Pass as we worked on our decision to try Saddle Mountain or Kiona Ridge for some chilly-ass December fly time. Fifty degrees forecast on the west side and twenty some degrees on the east. It looked like a cold one and a gaggle of us were heavily engaged in the standard circle jerk of what site would give us air time.

Our group was meeting at the Preston park and ride. As Ross, Todd and I were heading up Snoqualmie, Jeff Smith called from Preston and we had him meet us at the North Bend Starbucks. Another group had met in Issaquah and was set on Saddle.

Our discussion crossing the pass resulted in some group logic that the drive to Kiona wouldn’t take much longer considering the shuttle up and down the back side of Saddle would be close to the same amount of vehicle time. We further justified our decision that if the winds were strong Kiona, being a variably sloped ridge would give us more options than the hard vertical face of Saddle. Such is paraglider logic. In Prosser we called Dave Norwood who reported that it was blown out at the top of Kiona. We’d check the conditions lower down. Driving up Kiona on was like driving on an ice rink. We parked about a quarter of the way to the top and found eight to ten mile per hour wind blowing into Kiona ridge. We soon had our wings spread out on the crusted snow and ready to go.

Ross was first in the air, Jeff took off next, I clicked away with my camera as Todd secured his truck. I too was soon airborne and found the conditions to be smooth and damned cold. Lucky for me I was dressed up in layers that included my winter flight suit over insulated bike pants, double layered polar fleece tops, wool and polar fleece socks, Eddie Bauer gloves and foot and hand warmer pads cooking in their appropriate places. Oh yeah, and a heavy wool stocking cap under my snow boarding helmet. I was fine warmth wise, and really happy to be flying in December. 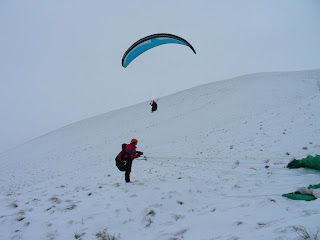 Ross Jacobson taking to the air about a quarter of the way up as Jeff Smith prepares to launch at Kiona Ridge.

After an hour or so of flying and laughing in childlike bliss, a gaggle of pilots arrived with Ernie Friesen at the helm. They were soon laying out to join us in flight. As they prepared to fly, Jeff and I headed to the east testing the variable sloped faces of Kiona, making sure we were able to stay low and out front and out of the upper winds that looked to be strong enough to blow a paraglider behind the mountain. We spooked a coyote that seemed quite concerned about the large birds over his head. I was impressed with the coyote’s stamina, staying out in front of us, always on the move.

In my estimation, Kiona is an amazing venue for studying ridge lift. The various shapes and slopes that make up Kiona certainly lend to mindful ridge explorations. 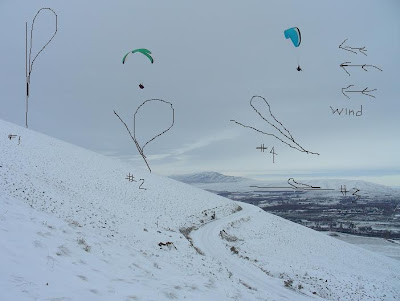 My art work is a little rough, but I think it demonstrates the point.

With the wind blowing into the ridge from an oncoming direction of somewhere between fifty and ninety degrees the shape of the ridge lift will be determined by the angle of the slope. Fore instance in figure #1 the inverted tear drop shape will be higher and skinnier than it would be in figure #3. Figure #2, about a 45 degree slope will have a lower, fatter inverted tear drop shaped lift ban than slope angle #4 and #3. On the lesser slopes, for instance in the normal landing zone for Kiona, I’ve heard pilots refer to “ground effect”. As long as there is slope, there is ground effect. Keep in mind that the higher the velocity the higher and/or wider that tear drop will be. Air density also plays and important role. Colder air is not only denser and makes for better lift, it also creates resistance to the wind which usually will equate to a lesser variable in the wind gradient*

*wind gradient is normally in reference to a higher velocity of wind as one ascends in altitude.

While experimenting with lift bands it is important to give yourself a downhill escape, especially while testing slight vertical slopes. Remember your glide ratio and be ready to either do a PLF or turn away from the hill and into the wind.