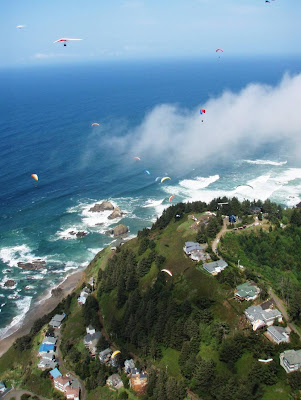 High over Maxwell Mt., Oceanside Fly-In Sunday 2010 – Photo by John Kraske
The Annual Oceanside Open Fly-In is the longest standing foot launch free flight event in the northwest. Originally it was called the Oceanside Races back in the late 1970's when it was frequented by twenty to thirty hang gliders that had glide ratios of not much more than 3 to 1. Today's hang gliders have glide ratios of up to 17 to 1 or more. That's technology. In the late 80's this event was opened up to include the fledgling paraglider pilots, endeared back then by hang pilots as "bag monkeys". The glide ratios of early paragliders were still greater than the first generation hangs, but not by much.
This year's event is being hosted by the Portland based Cascade Paragliding Club with participants coming from all over the Northwest and Canada. Over seventy-five participants were registered for the 2010 event, but not many from the Seattle area. It seems a scheduling conflict drew most of our pilots to the Beach-In event at Lake Chelan. Events at Oceanside are scheduled with the tides in mind. High tide often can eliminate the landing zone.

When the forecasters predict varying percentages of rain it has often stymied many pilots from attending, however, when 60% rain is forecasted for the coast, that percentage of rain can come in a matter of an hour or less, leaving the rest of the day rain free. More important is wind direction. South, southwest, west, northwest and west winds and all directions in between can produce some darned good flying in one of the many sites within an hour of Oceanside.

"Squall surfing" is a term I use for flying the low lying dunes when the west wind is cranking, being driven by approaching squalls. The air is smooth and it can be a joyful challenge testing the various wind textures as it reflects off the various sized and shaped west-facing dunes that spread out for miles on the sand spits that create Tillamook, Netarts and Nestucca Bays. It's a good idea to carry a quick-cinch bag or large plastic garbage bag to quickly stuff your gear in. As a squall approaches it pushes wind in front of it. If you're in the air it's a good idea to get down and bag your wing. With a squall comes rain. Usually, once the squall passes, so goes the rain and we are left with smooth clean air to play in.

Last year we had squall surfing at its best on Saturday. Sunday the sky cleared and Oceanside was epic smooth. 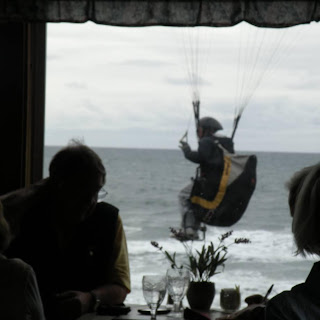 Ross Jacobson flying outside of Rosanna's Café in Oceanside. When the wind is strong we launch and land from the vacant lot next to Rosanna's – photo by John Kraske
Two years ago I took second place in the out and back category. Dave Cantrell had gone to the valley and flown from Sollie Smith out to the Tillamook Cheese Factory and back again. Last year Brad Hill took the honors by flying several passes between Tierra Del Mar and Cape Kiwanda. That was on Saturday and what a day it was. 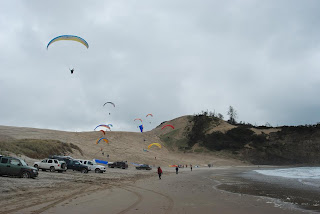 Cape Kiwanda on Saturday of the 2010 Oceanside Fly-In

The 2011 Oceanside Open will be held on Easter weekend this year, the 23rd and 24th of April. The event is low tide dependent and there's a good chance you'll see a flying Easter Bunny or two.

Regardless of the weather the Portland based foot launch free flight pilots are as friendly, helpful and fun loving gathering of folk as you'd want to meet and Oceanside is as spectacular a setting as anywhere along the West Coast.

If you'd like to register for this event you can go to http://www.oceansideopen.com/ to sign up. For more information contact Mark Sanzone at msanzone@yahoo.com or call him at (503) 292-1753. There is no pre-payment but the sponsors would appreciate a head count prior to the event. The registration fee, payable at the event, is $35.00 and includes a pilot gift, dinner Saturday night and awards. Non Pilot guests are $15.00.

I generally reserve some large beach houses and share the expenses. For the weekend I charge $300.00 for couples and $200.00 for singles and I provide a couple of bushels of fresh oysters from Netarts Bay. These houses have nice private bedrooms, ocean views with all the bells whistles and alarms included. We usually ask everyone to bring a potluck dish or some such contribution to the feeding frenzy that usually occurs. If you'd like to join us this year call me at (425) 890-1312 or email me at wdancer@netzero.com. The rentals go fast for this event so I must have a cut off and a $100.00 deposit no later than April 2nd.
Posted by Northwest Paragliding Club at 5:25 PM