Your East-side flying buddies have been working hard to maintain our hearty reputations. If the winds are right and the ceiling is high enough, we have been giving it a run without regard to wind-chill. 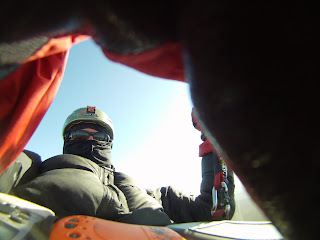 There have been five or six very good days of flying, and easily twice that many trips to launch with hopes of air time that resulted in either short hops or no-ops. Notable successful efforts include a number of strong wind, very cold days of flying at Kiona just outside Benton City. This site drew a number of West-siders early in the ridge-soaring season; but their numbers seem to have dwindled as the temperatures have dropped. 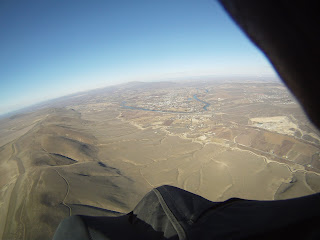 Those of you who have never flown Kiona you owe it to yourselves to invest the extra two hours (1.5 hours South of Ellensburg) and experience one of the nicest ridge sites in the state. It runs almost 4 miles end to end and faces NNE. There are several wind indicators that let us know when Kiona will work. The best site for current conditions is Hanford's Emergency Operations Center:

For strategic rather than tactical planning, look for North surface winds in the Tri-Cities 4-8 mph on XC-Skies.

The best day of flying, however, was at Saddle on Friday 2/18.
Winds on launch were NNE between 8 and 12mph for most of the day. We had some visitors from the South sound along with Paul M. Bob B. and myself. Everyone got in as much flying as their hands could take. I had one of my longest tandem flights that day. 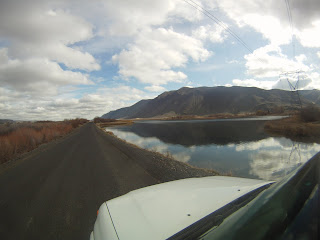 Near sunset the winds were strong enough to justify a bit of a ridge run to the East. Three of us soared with almost no effort, often hands free, a hundred feet or so above the ridge. Saddle is such an amazing artifact of geological forces - it really is a stunningly beautiful formation, particularly in the early morning and late afternoon light.

We tracked East for two or three miles soaking in the beauty while oblivious to the reality that the waning winds and our lower altitude would combine to deny us a final top-landing at the trucks. It is always nice to have friends in this game, and Bob gave us a rig-retrieve in exchange for a couple of tacos at the Mexican place, beer included.

Lonely, but not to be forgotten, Baldy poked her head up out of the sand and gave us (Doc and myself) a reminder of her thermic potential. We only gained a nine hundred over; but it was thermic, not ridge, and that was quite a treat so early in the season. Had the winds been 5-10 rather than 10-15 out of the SW we might have gone XC. Later that day, we all went for extended sledders at Bob's bump in Yakima. Curt, Doc, Bob and I where happy to show Doug Hoffman, the Hawaii state XC record holder, our chilly training hill. Doug wants to fly Bob's mid-summer and was asking all the right airspace questions. I guess bright sun mixed with cold air will always give you a ride around 2:00 PM.

On our list of major efforts reaping minor rewards was the road trip Curt and Doc took on 2/11 to Lewiston ID. It seems every year there is at least one "extreme" effort of desperation in response to our "need to fly." I am fairly certain the duo logged over 8 hours of road time in exchange for 45 minutes in the air. - Well done, gentlemen; well done.

Eagle has also given up a couple of good days; but you almost have to live next door to time that micro-weather critical site. If you’re in the area, give Doc a call.

Updates on when and where we will be flying are on twitter @ewpg.

Come on over when you can and we will lend you some warm mittens for winter flying in Eastern Washington.