Goat or Not A Goat Kiona Ridge

After a 3 p.m. phone call Saturday to my friend Dave Norwood, eastside flyability forecast guru extraordinaire, the word was out. Kiona would be our best bet. Saddle was looking to be too strong by late morning with a high probability of snow showers. Kiona looked perfect [1] with the chance of snow backing off at 11:00 and blue sky by 2:00. No more snow in the forecast until after 5:00. It was looking good for a window of late December foot launch aviation between 11:00 a.m. and dark. Dave posted his predictions with wind from the north at 18 to 25 mph.

I was thinking, Saddle would definitely be blown out. But, Kiona is a multi-facetted ridge with varying slopes and angles. If the wind is strong as predicted we could launch down low. If the wind is light we could launch from the 1,929 foot paraglider launch, the slightly higher hang launch or the 1,816 foot RC launch [2]. The truth is that Kiona has those plus countless variable options that do not exist at Saddle.

“Hit the Deck!” A few us met in Issaquah to depart by 7:30 Sunday morning. Would I be the goat should flyability end up being a big zero? Especially since this is the hibernation season and I alone would be the responsible party for an ungodly early Sunday morning rising. I’d be nominated for a Christmas lump of coal.

I sweated all the way to Kiona, Mark Heckler and I riding with Jeff Smith and Matt Becker riding with Ken Swenson. “Hey, the roads are in pretty good shape, don’t you think?” My attempt to keep a positive outlook on our three hour plus drive to a day that very well could scar my accountability forever. In Ellensburg there was wind early. Too much, I wondered. In Yakama, no wind. Plenty of sweat though.

No wind in the landing zone adjacent to McBee Road. The ridge tops of Kiona were encased in gray and the country side was powdered white. The snow seemed less than it had been a few weeks ago. The sky looked gray as sodden wool, but there was very little evidence of precipitation. A quarter of the way up McBee road we passed what Dave Norwood refers to as “Stupid Launch”, the area we used as our launch in high winds two weekends ago. Apparently the ridge to the west of “Stupid” sometimes produces rotor, and perhaps that might be the case with a northwest or even north wind. December 5th the wind had more of an easterly component which was pretty evident at the time.

1 Yes Kevin, 18 to 25 can be perfect for ridge soaring low and out front at Kiona.

2 All elevations are MLS

“Maybe the grass isn’t moving because it’s frozen solid.” I proposed as we continued our ascent.

At the saddle, also known as “RC Launch”, we parked and discovered a light wind hitting the slope from the north. It seemed to be picking up. Maybe I wouldn’t be king goat after all. I was hopeful. Yes, there was wind coming, but we were also at cloud base. Hopefully that would rise with the sun. Or maybe the wind would blow it away. Four of us launched. Four of us hiked several hundred yards back to the top. Heckler just shook his head and laughed at us, living up to his name sake. Il Bastardo!

He redeemed himself by offering to pick us up after our next sled ride. The wind had notched up a few mph by the time we were set up and ready to launch again. We actually moved down hill a bit. Jeff was soon airborne. Next was Matt. Two green Niviuk Artik2’s in the air. Color was needed and I was soon joining them on my red Artik. Plenty of lift and the three of us stayed out front and explored Kiona from stem to stern – approximately five miles of ridge from west to east. Jeff and Matt kept disappearing in the white room then reappearing as ghostly shadows of muted, inverted crescent outlines, finally emerging in full regal color. After an hour plus of chilly flight we landed in three part harmony where Mark was waiting to us shuttle back to the top. 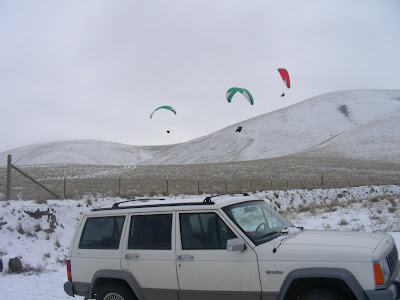 Jeff, Matt and I on final – The lz is approximately 832’ MLS - Photo by Mark Heckler

Back at the Saddle, the wind was hammering at twenty plus mph. We’d attempt a lower launch and headed for “Stupid Launch”. Not enough wind here, no doubt this day’s northly wind being partially blocked by the ridge to the west of “Stupid”, so back uphill to a more appropriate spot. We parked along the road and were soon joined by Richard “Doc” Shallman who wanted to know which one of us was Ross. I pointed at Mark. Mark said, “Ross isn’t here”. Doc put the gun back in his glove box (just kidding). Once again we prepared to launch into a slightly cross from the left 12-13 mph wind. 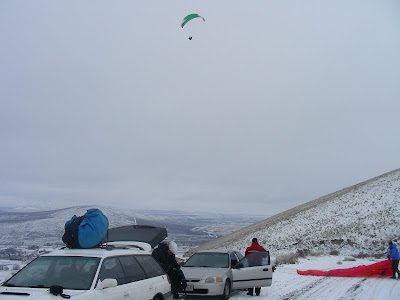 Mark Heckler preparing to launch with Matt Becker up and out front – Photo by John Kraske
I stayed on the ground shooting pictures, happy to not be a goat. After shooting a gaggle of pictures I could stand it no more and I too prepared for some air time. Jeff and Matt both got in top landings just below the road where we had parked. Ken Swenson got his 27th, 28th and 29th flights at Kiona on his first visit there ever and had a couple of interesting landings: One at the top in 25 mph wind. “Way to hang in there and pull off an epic save, Ken!” 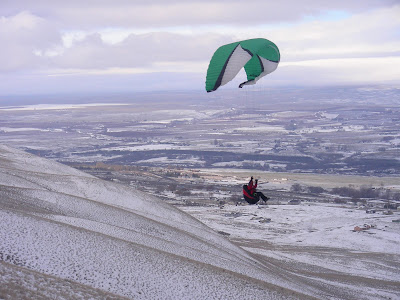 Jeff on ears, attempting to stay low in the growing wind – Photo by John Kraske


Yes, it was cold, but not nearly as cold as our previous visit on December 5. There was less snow this time too. We all had hoped for more. Apparently the snow that was present fell the day before and last weeks rains had washed away all the previously fallen white stuff. Dave Norwood’s predictions were not quite spot on, but damned close. And, I’m not a goat after all. We met another local pilot, Curt Boschek, in the landing zone. Curt had flown his speed wing down from the paraglider launch earlier.

Round trip from Issaquah to Kiona and back, with an espresso stop in North Bend and a fueling stop in Prosser, took a little over 6 hours of driving time, much of it in the dark. We arrived at Kiona at 11:00 and flew until 4:00. We were well satiated and all agreed that it was well worth the drive. A well deserved THANK’s to Dave Norwood for his excellent weather tracking and reports. We all look forward to flying with you next time.[3]

4 Dave was in Seattle on Sunday
Posted by Chris Amonson at 11:55 PM