Dave Norwood has some sage advice about the winds.

The Winch, A Tale of Trial and Error.

I have had a love of aviation my entire life and always dreamed of flying. I would stare at the sky for hours and watch the gliders fly overhead in Ephrata, Wa. After college I joined the Army with the dream to fly and it finally came to fruition in February 2001 when I had my first flight in an Army helicopter. After being deployed to Iraq twice and flying stateside for a few years I yearned for a way to fly without all the tedious planning and miles of paperwork just to go fly for 2 hours or so.

In 2008, the search began for a way to fly without all the pain of military planning and strict regimented air time. I found paragliding and decided it was a sport I wanted to take up so in February 2009 I took my first tandem flight and I was hooked. I started lessons shortly after and moved on up through P-2. I live down in Yelm and the 1.5 hour drive to Tiger, the gas costs, the food costs, and the shuttle costs added up quickly so I started looking for alternatives. I hold strong to the mantra that flying everywhere possible and variety over quantity is best to achieve true proficiency. Even still I find that I spend hours and hours driving, hiking, setting up, waiting for the winds to be right and then I fly and much of the time it turns out to be a sled ride.

So how do I make sled rides worth the time? I decided to get a winch. I will still have to drive a long ways to use it but at least I know that 10-15 flights a day is almost a guarantee as long as it does not get blown out. Now sled rides can be fun and not a total let down. Tow up, Sled ride down 5 minutes later I can be on tow again and enjoying the air. I began to look for a winch to purchase and realized that they are EXPENSIVE! With my machinist background before the military and my connections with machine shops I decided to build my own.
The Prototype 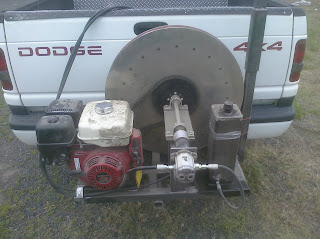 After much research and tons of thinking, I drew up the first attempt at the winch. Target price $3,000 completed. Just before leaving for Afghanistan in 2010 I enlisted my brother to help with the build while I was gone. I came home in May 2011 for my 2 week R&R and there she was, in all her beauty. Not finished. We spent the next 23 hours welding, machining designing on the fly and by 8 in the morning the following day, the masterpiece was done.

We slept for about 3 hours then went out to tension test it. Sadly enough, our calculations were horribly wrong and we could only get about 50 pounds of tension on the line and then we were at max PSI. I was heading back to Afghanistan defeated and redesigning.

After returning from Afghanistan we worked on it again in October. Added a gear reduction to the Hydraulic pump and that was about it. Off to test again. We quickly found out that we blew the seal in the pump and could not build pressure. But we were pretty sure we had it figured out so we started designing the final model.
Final build

February 4th  : We pulled everything apart and started the frame from scratch. The hydraulic tank is now integrated into the frame. We still use a gear reduction but are using a much larger pump. It is actually a dual pump that has a main pump and a smaller one integrated into it. Not really by design but it was a pump that we had on hand so we used it. The smaller pump is used to create the basic line tension of about 20 pounds which helps keep the line on the spool and the main pump is used for controlling tow tension via a Hydraulic pressure regulating valve. This thing is built like a tank and the frame will never break or bend. It came out a little heavier than planned but still manageable. We did not have time to test it due to Superbowl Sunday but we were confident that it was good so I brought it home. 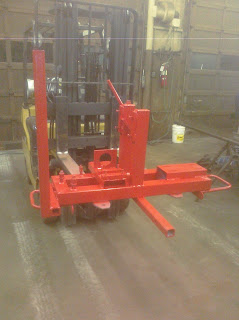 A few days later I took it out for tension tests. It worked super smooth and was easily hitting tensions of 150 lbs with just over 200 lbs available. SUCCESS!! well, so I thought anyway. I did not test it at the higher take off speeds of 25-30 MPH. I had a burning feeling that I need to test it further and I am glad I did. I sped along 5, 10, 15, woohoo 17, BAM!! All pressure was lost and the line came flying off the spool, then it snapped. I stood there and scratched my head for a while and tried it again. Once again, 17 MPH and all pressure was lost and snapped my line again. Back to the drawing board. After some more head scratching and conversing with my brother we determined that the flow rates were high enough to cause a vacuum and cause a cavitation in the pump. So, after some thought I re-routed the hydraulic supply line and return line and voila it works much better now 25 MPH and no cavitation. I have a few more speed tests to perform but it is essentially ready for flight testing. So, if there is a tow administrator out there who wants to come out and play it would earn some fun days of towing if they would be willing to sign me off as a TECH (assuming my skills are up to par). The TECH thing was something I completely missed in the USHPA SOP and was under the impression that no rating was required to operate a winch but now I stand corrected. Minor setback though. So after almost 2 years of designing, testing, failing, then succeeding I finally have a finished product. Total cost $3,300 due to extra parts and new frame. I think one could be built for about $2,500+labor now that I have an idea how to do it. Here are some pictures of the final design. The only difference is the boom is painted now. My next design is already in my head and it will be the “winch of the future” but it is top secret so you will just have to wait and see the real masterpiece of modern engineering and technology. 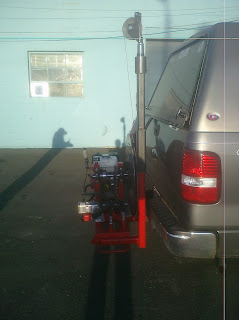 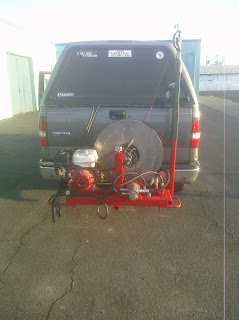 Here is a free flight independent movie proposal that needs our support.  If you have a moment check it out.


Posted by Chris Amonson at 9:06 AM No comments: