Sensitive Chaos is the mixing of elements that takes place and causes what we refer to as “rowdy conditions” while flying. It’s also the title of a book I recommend to all of my students. Sensitive Chaos by Theodore Schwenk is a great coffee table book about the elements of wind and water current, not a book that is necessarily about flying, but a book that will lend you an understanding of the infinite and finite elements that sometimes create everything from “butter milk” flying to “rodeo air survival” soaring, and everything in between.

Kathy and I just spent a glorious thirteen days in tropical Yelapa, Mexico where the paragliding is often not much more than the frosting on the cake of a vacation of unparalleled social and geographical magic. Breeching whales and slithering boa-constrictors, basking iguanas, darting blue/green macaws, soaring frigates and turkey vultures, marvelous food, unique music and some paragliding from two different launches; Yelapa Tapa at 2,000 feet MSL and Yelapa Tapita at 630 feet MSL. This year we only took a one day break from flying. Most of our flights from Tapa and Tapita were little more than extended sledders. The weather was cooler than normal but started warming over the past few days of our stay. And, the last few days we had our best flights. Last year my best flights were from Tapa. This year we caught a couple of days of pre-frontal conditions that produced some epic Tapita flights. Tuesday, February 22nd we hiked the 20 minutes up Shit Creek to Tapita and got Kathy set up to launch in some pretty steady straight in wind of about ten to twelve mph. It was about 1:30 when Kathy took to the air. With a grand total of sixty some flights under her belt of about half are solo, Kathy was on her way up right off of launch. “Relax and get comfortable.” Was my radioed suggestion. Still going up, she didn’t look all that relaxed. “Relax Babe.” I suggested. “Cross your ankles. Let the weight of your arms hang. Let your wing fly. Don’t fight it.” Yeah, right. The next thing I see is a 75% right side frontal. “Hands up!” Still I’m attempting calm. Yeah, I’m knotting up inside as I clip in to launch. “Relax Babe, it’s looking good out there. Enjoy your flight and let your wing fly.” 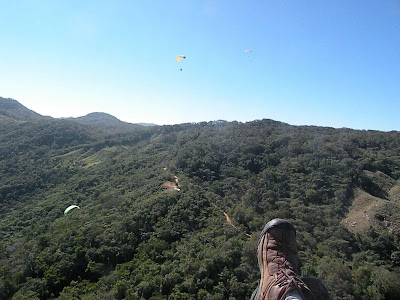 Yelaps Tapa launch is just to the right of the light colored paraglider. Photo by John Kraske February 2010. 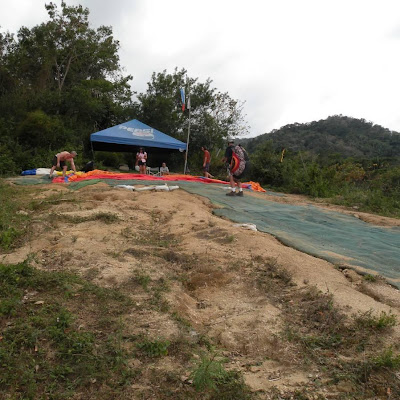 Apparently during one of the many pilot induced collapses, Kathy had inadvertently bumped the volume on her radio down and wasn’t hearing my broadcasts to stay out in front of the launch and out of the mouth of the river valley. “Kathy, please stay out in front and to the left of launch. Stay out of the venturi, that valley can suck you right upstream where you don’t want to go today.” She apparently wasn’t listening. I flew to her and shouted for her to get back over launch which she did. She was relaxing more and wasn’t experiencing any more collapses. We were testing her bump tolerance, and she was definitely dissuading other pilots from flying. Although conditions were settling somewhat and Kathy seemed to be enjoying her flight and seemed to have relaxed some still only two visiting pilots joined us in the air. Peter and Mike, both from were having a challenging time of getting off launch but once in the air seemed to be having a grand time. I was settling in and enjoying the air. Scanning about I’d lost visual of Kathy. “Ah shit, she’s gone down…” was my immediate thought. Finally I picked her red and orange wing out of the dark green background beneath her. She had flown into the river valley and it looked to me like might be setting up for a light wind approach to the beach. Not a good idea. I was on my radio asking her to kick her legs if she could hear me. She could. I didn’t bother asking her what it is she didn’t understand about my early instruction to not fly into the valley. I’d save that for later when were on terra firma. “Babe, fly cross wind to your left the back again 180 degrees to your right. Good, just like that. You wanna be high on your final…” She pulled it off and just barely got her forth successful spot landing. Turned out it was an hour long rodeo ride for Kathy’s longest soaring flight in Yelapa. I continued to fly for a half hour longer until I too joined her on the beach. It took me the full extra thirty minutes just to settle my emotions. Mike and Peter continued flying as Kathy and I hugged, had a little ground school session on venturi, rotor, ridge lift, percolating thermal activity and “sensitive chaos”.

So, here’s what happens: It’s not just black and white. Not just wind hitting a vertical surface or the sun’s heat warming the ground, the ground warming the air and thermals going up and with the wind. It’s much more complicated. It is “Sensitive Chaos”.

Cold air moves to warm. I like the analogy of a soldering iron heating metal and drawing flux and solder into the metal. A cooler material being drawn into the warmer material. Same happens geo-physically. For instance in the evening as the land begins to cool below the temperature of the ocean a breeze begins to blow from the mountains to the sea. In paragliding we call this a catabatic flow. I like to think of it as the cat creeping down from the mountains to the sea. As the land mass gets colder relative to the temperature of the ocean that offshore flow gains momentum. In the early morning the catabatic flow can continue until, with the rising of the sun, the land mass begins warming and the cat slows its approach to the sea. Finally the land gets warmer than the sea. This is when we begin to experience “anabatic” or onshore flow. Now the sea is cooler than the land.

Now let’s consider the shapes and angles of the land mass where it meets the sea. There are numerous vertical slopes, variable directions of canyons and valleys, ridges and conical shaped mounds. All of these have variable effects and dictates on the volumes of moving air masses in relations to the terrain. Earlier in the day, as the winds change from one direction to another it can be like a slow churning blender. On the ground there are varying shades and colors of ground. There are trees and bushes that hold cooler air. There are open plowed fields that tend to heat more rapidly than the treed and brush covered slopes. There is the light colored sand beaches that tend to reflect the sun’s heat or darker colored fields that heat more quickly than the beach but can sometimes generate thermic activity more rapidly than the lighter colored fields and slopes. Early as the wind changes all of these factors; colors, shapes, direction, wind velocity, fluctuation in wind velocity and direction, all these elements lend to the chaos. As the day warms air density decreases, as does the resistance of lesser density. As the day progresses all these elements are looking to blend and form a constant pattern of consistency. As the air cools post afternoon, air density increases, these elements develop a more cooperative relationship which lends a more smooth and pleasant ride.

Another variable I failed to mention is opinion and I’m pretty sure that there are lots of opinions and experiences to add to the chaos of mine.

Our last full day in Yelapa Kathy and I flew tandem. Same good pre-frontal conditions on Wednesday as there were on Tuesday. We launched a little bit later than we had wanted as we had a surprise visit from our friend Bob McCormick at our Palapa which is about a third of the way up Shit Creek to Yelapa Tapita (the 630’ launch). We had a great visit and heard a phenomenal story that warmed both our hearts and endeared us that much more to Yelapa. On our hike to launch it seemed that the winds were backing off. “Perhaps”, I thought, “the weather front that was pushing the winds our way had passed by.” We took to the air at about and flew for over an hour. My goal was to top the conical shaped, jungle covered hill behind and above launch and see what more we could achieve. Our dear friend, Dinaldo, was going to join us for dinner at seven and we had some cooking and cleaning to do before. We soared with turkey vultures, a white masked osprey, frigate birds and the beautifully blue-green colored macaws that darted through the air all around us. We viewed the whales at play just outside the bay. I demonstrated the proper high wind landing approach to Kathy and we were on the beach with enough time to make some final purchases for dinner, get on up Shit Creek in time for a couple of showers and our final dinner in Yelapa.

Kathy and I will be hosting a Yelapa Tour in 2012. We’ll plan it to include the Valentine’s Day Costume Party – the biggest celebration of the year in Yelapa – and will encourage our guests to costume up. It’s fun. We are currently negotiating some group rates at some fine beach view units with all the whistles, bells and alarms, even a clothes washing machine. Full WiFi is currently being installed. I’ve been visiting Yelapa since 1996, pre-electricity era. With the assistance of our local friends we have targeted all the best deals available; taxi service and how much to pay, all the fine eateries in Yelapa, kayak rentals, horseback riding, our friend Pamela is an exceptionally talented Salsa dance instructor, there are yoga classes, cooking classes, Spanish classes and, of course, paragliding, hiking, waterfalls, fishing, scuba, snorkeling. I’ll contact Brad Gunnuscio who has been conducting maneuvers clinics in Yelapa for anyone wanting to include some time with him. Les also offers tow ups when they’re not engaged in clinics. So, mark out a couple of weeks next February and we’ll get all the costs down and hopefully you can join us in Magical Yelapa, .