“Lets go jump off a cliff!” or Blanchard XC

"Lets go jump off a cliff!", shouted Ron. I was thinking, "Really?", as I looked up to see my buddy loading up his glider. I was happily reviving a burn pile in the backyard and was not yet that excited about flying. It had been blowing SE at 20 all morning as the first indications of cumulous clouds went racing by. I reluctantly left my yard work behind and thought I guess I could go up and repair the water damage on the south launch while the gremmies kick rocks in the blown out cross conditions. I began loading my equipment. A wheel barrow, rake, shovel, and pick. I thought I had better bring my wing just in case but had pretty much just planned on driving if the guys were even able to launch.

We arrived to find a few south end guys setting up and the sight of approaching squalls in the distance. I began the task of repairing the trench that had been cut into the south launch over the winter as Ron joined the others in setting up. We all hid under the gliders as the Squalls came though. First as rain, then hail, and then rain again as the SE gusts continued to blow. While passing the guys with my 10th wheelbarrow load I said, "You know… you should really be helping me out. Not because I really need it but because every time I have done work party stuff I have always skied out". " It's good karma" I said. Just then the gusts seemed to be settling and the guys began hooking in. The first two launched safely and one got over and stayed up for a bit in turbulent lift so I started to set up. 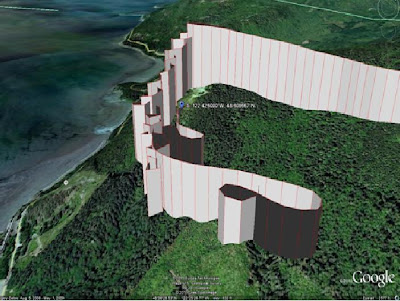 By the time I was on launch the last of them was struggling over the mud flats below. It was a bit cross still but had moments where It would cycle in straight so I went for it. I was down to the tree line in seconds when I found one that I could turn in. It was drifting hard out of the valley as I climbed a few hundred over and I soon found it impossible to follow so I left it hoping to find more to the east. That's when I realized that Ron had saved himself and was now joining me on the east side of the saddle. I was getting thrashed as the edges were vicious. My knuckles were white as I tested out this one and then that not finding anything organized and just barely hanging on. Then I spotted a red tail and decided to follow him back against the hill. It was so rough that I was scared to turn down wind but managed to make a few more turns. Ron was just below me and went violently negative twice being thrown up against his keel in a 30 second span. I made a few more turns in the gnarly air as he decided it was not worth it and started flying towards the LZ. Two more turns and the adrenaline was getting to me too. I had 2400' and I figured that was enough to get across the freeway and went all or nothing to the east. As I have found so many times before there was lift over my house at the base of the Blanchard road. I have climbed here enough to start referring to it as "my house thermal". It was just as violent but I stayed with it as it got stronger and stronger. 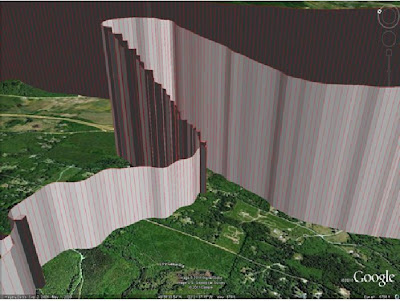 At 3800' the violence stopped and would not return the rest of the day. I was approaching a large dark cloud street that seemed to go on forever in each direction. I thought about going down wind but the landing options get very scarce in that direction and in a strong south wind once you start that way there is no coming back if it doesn't work out. It would be an all or nothing for Bellingham and I was not up for the challenge in my adrenalin exhausted state. As I approached 5000' I wondered how far south I could travel with out turning and headed straight down I-5 with quite a slow ground speed. As the lift would increase I would speed up to maintain my cloud clearance and slow to best glide when it was light. I was over Burlington 10 miles to the south when I finally wussed out and made 6 turns back to 4000' before continuing on. 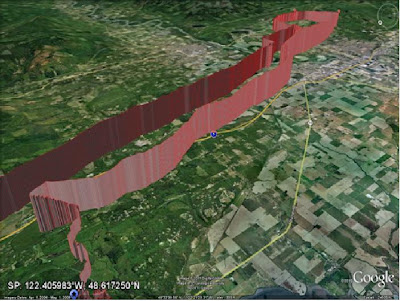 I was crossing the Skagit River when I noticed a sail plane just to my right and 500' below. That's when I started thinking about Arlington. As I crossed Mount Vernon I saw him climbing to cloud base and left the street for Cultus Mt to the East. I decided to continue on following this cloud to the end and did not give chase. There were military flights going on as well and twice in this area I had them pass 1000' below me. The first was an A-6 and the second an F-18. A good reminder for me to keep clear of the clouds. 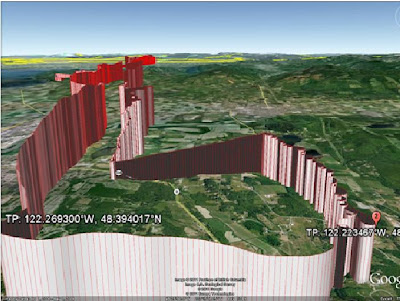 My Street finally ended over the peaks west of Big Lake and I got drilled as I tried the late crossing to Cultus Mt. I found myself Low and drifting to the north in zeros toward Clear Lake with a few red tails. I managed to get high enough to make a mad dash down college way to a large housing development with a soccer field in the middle. I had a few minutes to find lift or land. At the last minute I ran into one that was drifting hard but climbing slow and went for it. After hanging on for a bit I saw a Golden Eagle to my east. At first I thought he might have better lift but this has back fired a lot for me in the past so I just kept turning. As it got stronger he came in below me his shoulders and head were glowing the golden color that give them their name. He was big but shy and stayed out of the core as he darted around each time I passed over head. Finally I was on my way again and this time it would be with a tail wind. 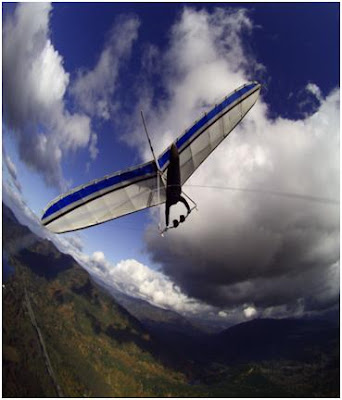 I arrived back in Alger in minutes my GPS vario registering 70 mph ground speeds at times. Do I land now in the Blanchard LZ or do I dare cross Samish and Galbraith to find out how long this street really is? The lift was good and I had just flown another 15 miles without turning so why would it stop now? As I committed I started to descend and was getting nervous. I knew of a spot between Lookout Mt and Galbriath that always seemed to produce but it would take me away from a possible lz at Lake Padden. If it wasn't there I would be in a bit of fix and gliding low for Bellingham. It was there. Slow at first but I stayed with it. Again an eagle appeared further east but I resisted the urge to join him. As The strength continued to grow he came in right under me. He was a huge mature and exceptionally beautiful baldy. He had a presence that demanded your attention and respect in a encounter that I will not soon forget. 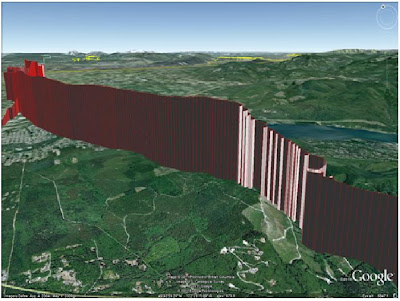 He had decided to enter my thermal opposite my direction which put us on our first collision course. At first I thought he must not see me as he flew right at me and disappeared just under my side wire. He was looking me right in the eye and did not even flinch as he made it clear that he was a dominate eagle. I have heard they could live to be 30 years old or more and this one had clearly been around the block a few times. I was climbing really well and each time he came around he pushed closer. He then reversed his turn and came up along side of me. I acted like I hadn't noticed in an attempt to not be threatening. That's when he decided that I wasn't turning steep enough and pushed in under my wing looking me straight in the eye. I banked up harder and he was right as the lift increased. He soon passed through me and then turned north on glide. I was right behind him watching him go up and down in the lift. We crossed Galbraith and then Bellingham staying above and outside the 5nm radius of Bellingham airports class D airspace.

I was half way to Canada in a snow squall when I finally lost him. I could see by the shadow on the ground that this cloud street continued far on into BC and it seemed to get darker. I continued on over Lynden but thought it was the border town of Sumas. I looked hard for the crossing but couldn't tell where it was. It was 5:30 now and I could see by the shadows behind me that it was drying up to the south. My hands were icicles and it was time to start thinking about landing. The winds had decreased a lot so I did a 180 and started to glide for Bellingham. I really wanted to land as close to Bellingham as possible and as I neared I could see that I might have enough to land near Scotty Brown's, a bar and grill that had Boundary Bay Breweries IPA on tap. That's when, for the 3rd time in my flying career, that I saw a balloon ahead and below. I had to try and so dove down to intercept. If you have ever tried to catch a balloon you will know how hard it is as it is rising and you are descending. It was close but I missed again. Now my glide was not good but I tucked in my elbows and concentrated on my gliders performance. I would hit sink and loose it then glide through lift as I wondered if I needed a plan B. As I flew over a large industrial complex I felt the hand of god lift me towards me thirst driven goal. I arrived over a field adjacent to Barkley Village with enough altitude for a few wingovers and a banked up approach between light posts and a rare great flair landing after a long XC.

People stopped by for the next 30 minutes with eyes wide as I answered their questions. Ron arrived while I was sipping my IPA an hour later. 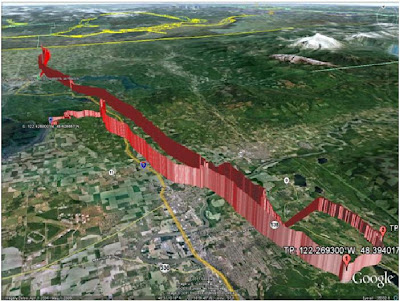 My best flight in Chelan was 75 miles to Creston and the legs of this triangle are close to matching that feat and only took 3hr 14 min. It had been a great soaring day for Blanchard and my Karma theory had proven to be right once again. It reminded me of Matty's quote from his Blanchard flight a few years back. Seize the day indeed!
Posted by Northwest Paragliding Club at 9:39 PM