CAPE TO CAPE ON THE OREGON COAST 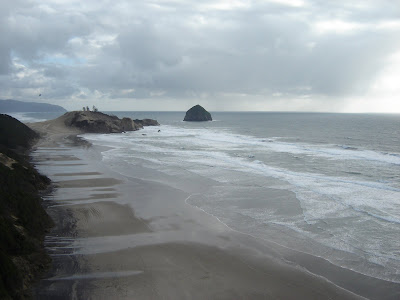 The beach on Saturday was forecast to be 80% chance of rain with southwest winds somewhere in the vicinity of nuking. We took our time leaving Kathy's but wanted to be in Oceanside for Sunday's forecast which was for mostly cloudy with winds from the west at a much more manageable level than Saturday. We were both thinking Sunday just might pan out for some mighty fine squall surfing. It didn't turn out that way at all.

We arrived in Oceanside about three and by the looks of things thinking we might be able to fly out of the vacant lot next to Rosanna's.

The wind was cross from the right and seemed to be west-northwest. What the heck was Weather Underground thinking? Southwest my ass. And when did the eighty percent rain fall? Had it come early in the day? Things did look moist for sure. The cloud base was pretty high for this time of year and there seemed to be a few virga clouds hanging high in the sky off shore, marching to the south.

"Let's book on down to Tierra Del Mar!" was my enthusiastic suggestion. Kathy was every bit as encouraging. We booked. Tierra Del Mar is a mile or so north of Cape Kiwanda, about a half hour drive south.

April 2, 2011
On our way, passing by Cape Lookout launch, historically known as Anderson and more recently as Gammon Launch there was a gaggle of hangs set up along the road. We stopped.
There wasn't a lot of wind evident on launch. A huge black cummie was obviously sucking or blocking or something. Obviously?
Huh? Rather than chat and banter with the hanging about hangies we decided to stay our course and head south for Tierra Del Mar. Besides, I knew it was far too big of air at beach level for us to fly in the onshore flow being trapped and blocked by Cape Lookout. "We're gonna give Tierra Del Mar a shot." I announced to the condition speculating hang pilots. As we headed back to our car the forecasted 80% of rain, in the form of frozen little white balls, started pelting Cape Lookout in a very serious manner.

Fifteen minutes later we spied a Nova glider parked high above the launch at TDM. 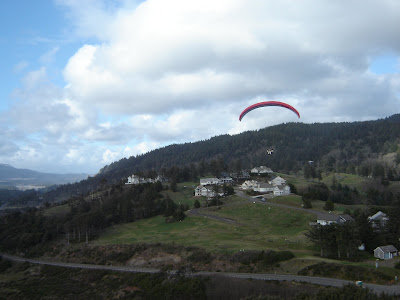 Jason parked above TDM with "Nantucket Shores" below. Photo by Kathy Nesen


Jason, a Portland area pilot hooted and hollered from the sky as we geared up and prepared to launch our 38 meter tandem in 20 mph west-northwest wind. As a safety margin we set up on the west-northwest facing slope just below and out front of launch. It was all I could do to get a partial wall built before I even had "get ready" out of my mouth. I was really busy as my wing took over and shot overhead fully inflated. Kathy has developed such a fine sense of anticipating that I hardly ever have to say a word. We stepped uphill and were soon in the air, hugging the trees along the road and climbing. The air was smooth and the lift very evident as we penetrated north over the road and up above the irritatingly named vacation housing development, Nantucket Shores. As if Oregon longs to emulate the east coast. Gimme a break. But we were happy to be up and away with Kathy clicking pictures and commenting on how spectacularly beautiful this part of the coast appears. Wow!

We flew up and around the corner, over the lake north of Nantucket….yuck - I hate that name….Shores, raking our shadows across the giant beach castles scattered, out-of-place, above the shoreline. 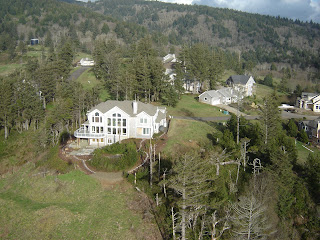 
We banked left and ran the mile or so south to Cape Kiwanda then back again, barely scratching across the gap where the road accesses the beach, just south of Little Kiwanda. We barely made it between Little Kiwanda and the pine shrouded, sand and sandstone ridge where we were able to eke out enough lift to scratch out a safe altitude and get back to launch. It seemed the wind was slowing booking around a few degrees more from the west. We attempted a few approaches for a top landing just to check the velocity. Finally we set down with no problems. Jason hadn't made it across the gap, landed on the beach and got a ride back, arriving as Kathy and I were setting up for another launch.

The wind had picked up again so we drafted Jason to help ballast our launch. My wing was snapping and flapping and doing its damnedest to take us para-dragging. We had our hands full with lines snagging on rocks and roots, old branches, Scotch Broom and Salal. "Be ready!" was my only, unneeded, command. We were jerked off our feet and dragged a bit as I attempted to control our wing overhead from our tangled, somewhat seated position being dragged and bouncing across the ground. The wing felt fine and was more or less ready to fly, but a huge dead tangle of Scotch Broom was wrapped tight in my right risers and lines, and seemed a little too much so I killed the wing and Kathy and I went for a drag into the tangle weeds behind launch.

As irritating as Scotch Broom can be, sometimes it has its uses. In our case it arrested our wing as we were being dragged over the rain muddied ground towards the highway and whatever lay beyond, me serving as Kathy's mud sled. 'Mud slide slim and the blue horizon…' played in my head. We had a good chuckle as we untangled, checked our wing for rips or line damage, then set up a bit further down the launch face. Covered in mud, looking a bit like twin tar-babies from Briar Rabbit's famed escape into the black berry patch (we just escaped from…), this time we aced our launch with just one stick tangled in our lines. A really dry one it seemed, and as we flew away to the north I gave the tangled line a good quick jerk and the offending hitcher broke and fell to the beach below. Once again we were free flying, up and away, enjoying the majestic beauty of the Oregon Coast, waving to the passing motorists on the beach and highway below. (Yep, motorists are allowed to drive the beaches here.)

We'd invited my daughter and her husband to dine with us back in Oceanside so had to cut our flight short, top landed and left Tierra Del Mar behind. Jason was still in the air as we headed back north. A fine afternoon for sure. 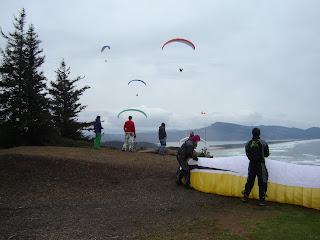 Today, oh my what a day! Kathy and I had a leisurely breakfast then loaded up with the idea of checking out Cape Lookout as the chimney tops in our neighborhood were showing west-north-west. As we drove away from Kathy's cabin, there were no fewer than a half dozen wings above Maxwell Mountain and Oceanside. "Look there's a paraglider….there's another one…and another…there's a bunch." I pointed our little Pontiac Vibe uphill towards Maxwell.

I think the whole of the Cascade Paragliding Club was already there. Some flying, other getting ready to. Kathy and I geared up with our small tandem. We flew for quite awhile then top landed because I'd forgotten to call Ancil who I promised I'd give a report. I left him a message encouraging him to join us. Then we launched again and had a short flight due to lightening winds. We caught a shuttle ride back to launch and I took my daughter for an extended sledder. Because the winds seemed to be lightening up, we decided to go have lunch in Netarts at the Schooner. Yum!

After lunch we booked on back to Oceanside. It looked good as there were a number of wings flying above Happy Camp which is a destination for the local coastal xc attempts. We hurried.

At launch I was commissioned to fly a tandem for a Thai woman from Australia. Kat was quite the adventurous soul and pretty excited to fly. Kathy relinquished her seat, flight suit, helmet and gloves. The winds had booked around a little more from the west and our launch was flawless. Working the ridge to the south of launch we achieved what I felt would be maximum altitude and enough to run north towards Cape Meares. A couple other wings were out in front of us and on their return to the south. Kat and I worked the higher hills further back towards the east and found enough lift to get high enough to relax and enjoy the epic views. At the south face of Cape Meares we worked our way to maximum altitude that gave us a captivating view of Tillamook Bay and the north Oregon Coast all they way to Neahkahnie Mountain. I then noticed our lack of penetration and some discerning turbulence. Apparently the wind directions, yes 'directions' (plural) which may have been a wind direction and/or velocity change, or perhaps just the effect of what Cape Meares was having on the winds. I set our course back towards Maxwell where Kathy and Kat's husband and Mother-in-law were awaiting our return and wondering what had become of us.

We didn't make it to Maxwell, having to land on the rock and pebble strewn Hundred Step Beach. What a beautiful and tranquil setting. We hiked up the hundred steps to the road and caught a ride back to Maxwell launch with a group of local pilots.

At Maxwell we discovered that Kat's family and Kathy were down in the parking lot at the beach. We had a few options here. We could ride down with some of the pilots who would be heading for home, we could have Kathy drive up and fetch us, or we could fly down and Kat could have a two-fer sledder that would reunite her with her husband and mother-in-law, and experience a spiral dive for a grand finale'. Of course, I asked if she'd like to try a spiral dive. She was slightly skeptical. "Kathy really loves to spiral. You just don't wanna watch the ground."

"Okay, I'll watch the horizon." I was impressed with her insightfulness. I usually have to tell my passengers to watch the wing or the horizon while engaged in spirals. She already had it figured out. A natural. Kat didn't run out her landing, but sat down in the sand as we touched down. She was probably dizzy from our spiraling, I guess. She was all smiles and hugs though. Can't get much better than that to end the day.

That wasn't the end of our day though. My friend Anne Harper gave Kathy and I a ride back up to launch and we took to wing again. This time with Kathy in the supervisor's front seat. We gained and gained as the wind was a little stronger this time. Only one other tandem and a hang were flying. We opted to run south to Happy Camp. We made it working the somewhat light lift, with ease, working the variable facing cliff faces all the way. A great landing at Happy Camp. An awesome hug and kiss from the woman I love and we were packed up and hiking the road out of Happy Camp. Sea, my daughter, and her husband Chris picked us up and we headed back to Kathy's cabin in Oceanside and a team effort gourmet meal of pasta putenesca and arugula salad. Now that's a way to have a day.

It's raining and we're packing up for the drive home. What a weekend. Seems like I'm blessed with good flying conditions every time we come to the beach.
Posted by Northwest Paragliding Club at 3:27 PM