For anybody in the paragliding community who has not heard of or seen a GoPro camera over the last year then they must have been living under a rock! The skies are dotted today with pilots wearing the camera stuck to their helmets, wrapped around a limb, hanging from the canopy or at the end of a camera pole. The success of this little gem is quite simply down to its versatility and high quality video that it produces.

What Camera to choose?
There are a few models to choose from in the GoPro range and  that can make it quite confusing to the buyer. But in reality there are only three different cameras  – The SD Hero 170, HD Hero 960 or the HD Hero  - the difference being the video resolutions supported and additional accessories that can be added. All models do not have any viewfinder or an LCD screen so you cannot directly view the video or the pictures you take until you load them onto your computer or attach it to your TV screen for viewing. The HD Hero model however does have an optional LCD screen you can purchase that allows you to overcome this limitation.
The HD Hero comes in a bunch of different flavors based on the mounting systems that are shipped with the device. There is the Helmet Hero, that is really the one most paragliding pilots will be interested in, Motorsports that comes with a suction cup for sticking to the side of you car, Surf for attaching to your surfboard and Naked – one that comes with a basic set of 2 mounts.
The SD Hero provides a 170 degree field of vision at a resolution of 512x384 pixels and needs 3 AAA batteries to run at a cost of $99.99. Compare this to the HD Hero 960 that provides resolutions of 1280x960, 1280x720 and 848x480 at $179.99 and the difference in dollars is money well spent. In fact I wouldn’t recommend the SD version to anyone these days. the rest of this little review will focus on the HD range.
At the top of the range there is the HD Hero that provides even higher resolution with the Naked version costing $259.99 with no mounts, and $299.99 with mounts. The HD 1080 resolutions supported are
As you can see, both letterbox format (16:9) and the old square TV format (4:3) is supported and you have a choice of 30 frames per second or 60 frames per second that provides super smooth playback in slow motion.
In addition to the resolution difference from the HD 960, the HD 1080 camera has a little port on the back that’s supports an extended battery pack or a LCD viewer. More of that later.
Taking Pictures
As well as recording video, the GoPro has also a 5 Megapixel camera. With its wide angle fish screen lens the camera packs in a lot of field. However the best feature is being able to automatically take pictures at regular time intervals which the use can specify. I have mine set to take every 30 seconds and its amazing what you capture sometimes when you forget it’s on – Even my restroom trip to the woods one day! What I like about this mode is that the battery lasts a long time and you don't need to take your hands off the controls at all while flying.
Recording Media
All cameras record MP4 files to those little stamp sized storage cards called SD (Secure Data) cards and the camera does NOT come with any so you will have to budget for buying one if you don’t have a spare one around.

It’s important that you buy the right kind of card as they need to be able to support data being written to the card while recording at up to 15 MegaBits per second. What you want is one that is rated as class 4 or class 6. A 16GB card can be bought really cheaply these days from Fry’s down at Renton for around $25. SD HC (High capacity) cards come in a variety of sizes and Kingston is one of the better makes around and one that I would recommend. Recording at 720P 30fps will use up a 4GB card in about an hour. About the same time the standard supplied lithium battery lasts! So an 8GB card is generally more than enough for your typical needs. I have 16GB cards but I find that if you have an hour of paragliding video you will need to do a lot of editing anyway. Having 4 hours is way too much!. The camera  automatically creates a new file when 4GB is reached due to the limitations of the storage system , but it means you can record for more than an hour if your battery lasts.
Power
The HD cameras are powered by a lithium battery that as I mentioned before lasts up to an hour  or so in continuous use. GoPro just recently launched and additional battery pack for $49.99 that gives you approx twice the recording video time. Not sure it’s worth the money though personally.
Accessories
There are just so many options for this camera, especially mounts, and whatever your needs you will find what you are looking for I am sure.

I purchased the recently announced LCD add-on ($79.99) for the HD Hero 1080 model that allows you to view the videos and pictures that you take without the need to load the SD card into your computer or attach the camera to a TV. I also have the wrist mount ($39.99) which I thought would be useful but turns out it’s not, at least for flying. The angle of the housing needs to be rotated 90 degrees.

Just announced this week is the option to take 3D video and pictures using two HD Hero cameras and the the new 3D housing ($99.99). As a geek I am super excited to see how this works out. I can imagine that using this while flying in gaggles will produce some spectacular results. Of course you really need a 3D TV to use this option to its fullest unless you want to watch the videos on your computer screen using the old red/green glasses from the 50's!
Summary
For it’s compactness, ruggedness, accessories and high quality videos and pictures, this little beauty is hard to beat. However, it can get expensive when you start adding up all those other add-on’s. Full information on all the cameras can be found at www.goprocamera.com


From Matty Senior:
Inspired by Philippe Broers the PWC photographer

I've uploaded a couple of pictures of a Go Pro camera mount that I made this year. I think its a lot better than putting it on your helmet because you don't get all the movement of your head when you scan the horizon for information. All you need to make one of these is a 99cent clamp from home depot. 2 meters of 1 inch wide webbing some electrical tape and a drill to make the hole for the GoPro and a couple of small washers so you don't break the plastic mount for the GoPro. Both Brad and I have got heaps of amazing footage with this mount in Nepal this season and would recommend it. It is very versatile in that you can easily adjust its position up/down, forward or slightly back to include the face of the pilot and flight deck. It also resolves the problem of not knowing if your GoPro is on record or standby. Below is a link to the pics I uploaded. http://groups.yahoo.com/group/nwparagliding/photos/album/398692242/pic/list 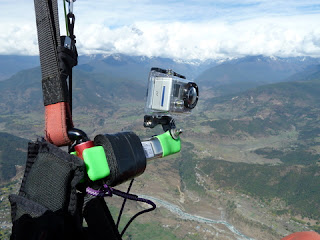 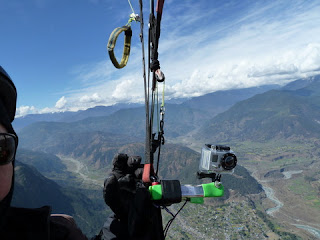 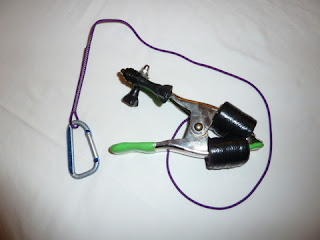 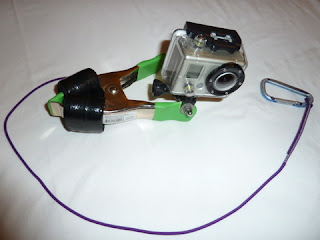 Photos from Iain Frew below 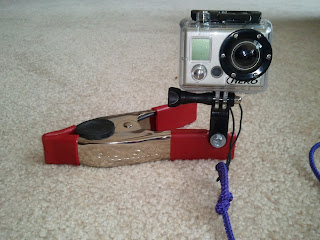 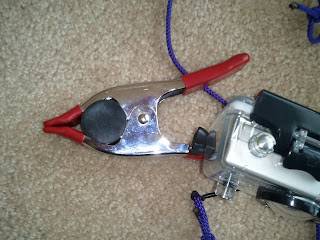 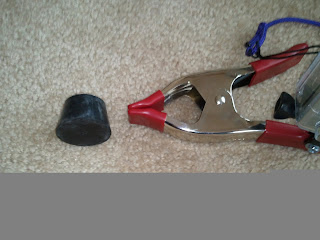 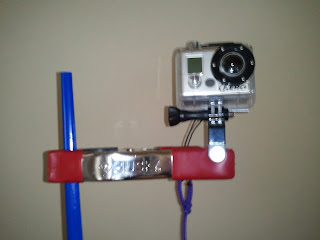