Sunday, September 27, 2009 was magic at Saddle Mountain. The winds were strong from the north with gusts up to 19 mph. As the morning advanced into early afternoon the wind shifted a little more northeast and dialed down to a reasonable level and more and more of the Baldi Mountain Fly-In pilots started to arrive.

I hadn’t planned on attending the Baldi Fly-In this year but after looking at the Ephrata weather forecasts after an epic Tiger Saturday of flying tandems, I called up a bunch of my former students and we got an early start from Issaquah, meeting at the North Bend Safeway parking lot to stock up on eats and organize our car pool. I arrived in North Bend with a new friend.

On my way up the Sunset on-ramp to I-90 east, a wizardly looking fellow stepped off the curb and stuck out his thumb. He looked Asian, but might have been Native American. He lacked a staff, but carried his airline style pile blanket and a water bottle stuffed in a small white plastic bag. He probably just needed a short lift to North Bend, I thought. He was somewhat excited, in a gracious and regal manner and started telling me about the black bear that woke him from his night under the overpass. The bear had apparently been fishing in Issaquah Creek and had a nice freshly caught salmon that he left behind for my new wizardly friend to have for breakfast. ‘Okay’, I thought, this is going to be an interesting day.

Right away I liked the guy and was curious about his origins. Turned out he was both Asian and Native American. I started thinking of him as “Bear”.

On his way to his home in Rolla, North Dakota from California he had encountered a few challenges and I knew his company would fill up the two and a half hour drive to my destination flying site near the agricultural town of Matawa on the Columbia River. At the Safeway roundup in North Bend we stocked up on lunch supplies, carvanned up in three vehicles and headed east.

By the time we crossed the Columbia River Bear had decided to stay the night at Crab Creek. His words, “I’ve got lots of time.” And, he did seem to be enjoying the scenery. Then it came to me…sometimes I’m a little slow: If a black bear could gift this guy with a salmon breakfast, why couldn’t I gift him a tandem flight. He didn’t argue. But first I was committed to flying Michael, Jim Cecil’s fourteen year old son. Bear understood and, as he stated earlier, he wasn’t in a hurry.

At launch several pilots were hanging about waiting for the conditions to soften a little. At least for the on launch wind velocity to back off. It’s absolutely no fun being drug on Saddle – nasty rocks. Greg Wong and Mike Brandt were the first off launch after a few failed launch attempts. I was next with Michael clipped in on my small tandem. We set up with several pilots assisting and Jim Cecil reading off wind velocity fluxuations. Seemed like there was a lot of fourteens, eighteens and very few quick nines and tens. With Rob Hine and Dave Pugh lending launch assistance, Michael and I were up and away. Our combined weight was a little over the top end but we were maintaining in ridge lift. In several spots along the ridge it felt like we would slam into a hard edged wall and get thrust upward. We flew around like this for quite awhile then got a sink cycle and headed down to Crab Creek, landing in a nice steady head-wind.

The north winds were a little strong early, but after numerous attempts Mike Brandt gets away from the launch on a down cycle while Jim Cecil gages and calls out wind velocities. 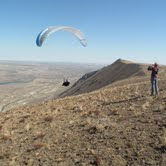 We caught a ride back up with a couple of frustrated Canadian pilots who were lost trying to find their way to launch. They were driving an overloaded small Mazda but managed to squeeze me and my gear in. We met Nick Becker where the gravel meets the pavement in Matawa and transferred me and my gear into Nick’s four by, and headed up with our Canadian friends following. At some point up the backside of Saddle Mountain I became separated from my car and house keys. Somewhere on the way up our Canadian friends got stuck in the sand and we lost them as well. On top I talked with another Canadian pilot who knew them and we tried to radio them. No luck. Eventually they made it up but we couldn’t find my keys in their car. Oh well, I have a hide-a-key. 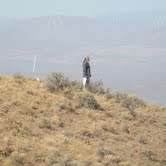 Bear, the wizardly hitcher, had been observing pilots blowing launches and wings soaring during our return shuttle. I got him signed up and trained, hooked in and we were off in very laminar air. This time under my large tandem. There wasn’t enough wind for ridge lift, but the air was really boaty. We boated around a bit admiring the rocky cliffs and scenery below. It seemed as though we would soon be heading for the landing zone. Bear had my camera and was fiddling with it as best he could. As we slowly descended towards our destination with terra firma, flying in a northwest direction, toward the river. All of a sudden we hooked into a thermal that seemed to be tracking to the northwest. There were seed blooms and spider web floating in the same direction, away from the mountain, pushing at about a ninety degree angle across the northeast wind. After years of studying Theodore Schwenk’s Sensitive Chaos , it dawned on me what was happening. The Southwest sloped sun had been warming the ground north of Saddle all day and as the afternoon air cooled and the accumulated heat started rising - thermals if you will – the light prevailing northeast wind was pushing the thermals against the shadowed north face of the ridge at an angle where they were deflecting and tracking to the northwest; as Bob Seger sings, “Against The Wind”. Once I figured that out we dialed up about 500 over the ridge, set a course for the launch and found just a perfect amount of sink over the shadowed north face of Saddle that let us settle in to a perfect top landing. Flying Bear got a lot of bazaar pictures of his knees, the spreader bars and some interesting ground shots. He was pretty thrilled and probably a little nervous. He did get a few pictures worthy of posting.

Flying Bear the hitching wizard of Rolla, North Dakota and his pilot escort in flight at Saddle Mountain, WA on September 27, 2009 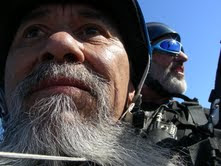 Bear drove Nick’s pickup down to the landing zone. I launched on a large Sky Walk Cayenne. I’m slightly under the weight range of this wing but the air was smooth. I got a pretty good soaring flight, finally got a little cold and spiraled down to land. We loaded four of us for the shuttle up in my little Honda civic. Where the paved road meets the gravel on R Street I pulled over for a look around for my missing keys. Chris Roberts found them in a blink of the eye.

Night was closing in as we arrived in the landing zone where we left Dave Pugh and Flying Bear watching our equipment. On our way home we dropped Flying Bear at the I-90 bridge where he planned to spend the night before heading east in the morning. A magic day!
Posted by Steph at 8:52 AM

I just love good para_stories during the off season. Keeps the spirits up for when the northeasters blow again and thermals start popping.
Keep up the good work.