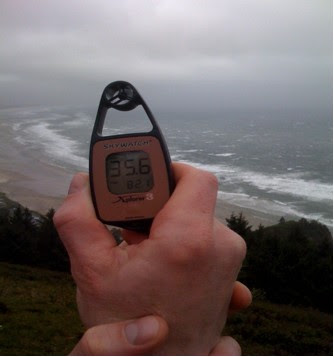 Scheduled for Saturday, May 2nd, this year’s coastal flying event just wasn’t destined to be. Almost all the computer based weather forecasts predicted gloom and doom, and for once it seemed they were right. We got lots of rain and lots of wind, mostly from the wrong directions. Oceanside generally works on a southwest to west-northwest wind direction, and of course, a wind velocity in a manageable range of 8 to 15 mph. More for hangs, less when it’s colder (air density). 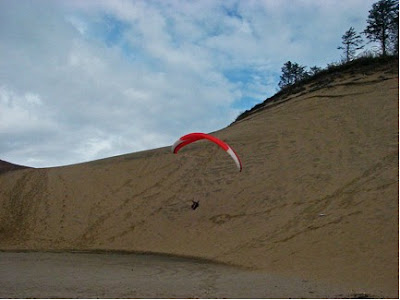 Saturday morning dawned with a low overcast and wet windows, the winds were from the south. A few of us opted to give the south face of Cape Kiwanda a try and hit the road for the 20 mile drive south. As we crossed over Cape Lookout the rain had quit and we were hopeful. We laid out our wings and tried some high wind sand soaring in dry air. After about an hour of play it seemed the winds were shifting to a more southwest direction and slacking off a little. We booked on back to Oceanside were the winds were still from the south, with a little east in it as well. Back to Kiwanda we chased, where we again set up for some kiting. Squalls were looming on the approaching horizon, then the entire horizon became one large squall, and sure enough, the winds and rains arrived with a vengeance. All hell broke loose with 40 plus mph winds pummeling the living daylights out the beach and everybody on it. Wet sand was blowing across the cape, looking a whole lot like the sand storm scene from the movie Hidalgo, only wet – real wet. The rains were blowing in horizontal sheets. We took shelter behind large drift logs until the rains quit. The winds didn’t. We left.

Back in Oceanside James Lee clocked the wind at 82.1 mph on top of Maxwell Mountain. Awed by the forces of nature I took shelter in the Vista House and surveyed my eyelids for leakage while several in our party went to tour the Tillamook Air Museum.

I detected no eye lid leakage and as soon as I knew it mid day had turned to late afternoon, the winds slackened. At about 5 p.m. a couple Tiger pilots set up for some kiting on the beach in front of Rosanna’s and pretty soon there was a gaggle of us kiting in 15 to 20 mph south-southwest winds. 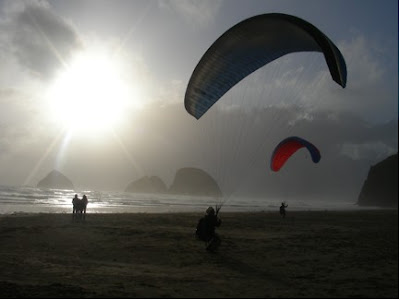 Matt Becker and Casey Veranth Kiting at Oceanside – Photo by John Kraske on May 2, 2009

Saturday night’s event dinner at the Tillamook Elks was fit for…well; I hate to be negative and critical…as one person put it, “comparable to grade school cafeteria food.” I’m glad I hadn’t gone to school in her neighborhood, and, personally, I wouldn’t have rated it that highly. The auction, raffle and the awesome Oregon pilot hospitality made up for the bad food. I’d like to recommend that the organizers contract the little Mexican Food wagon in Netarts to cater next year’s event. Killer good grub and a hell of a lot less expensive. Not just fiscally, but gastronomically as well. “Funky butt odor”. The Elks weren’t totally remiss; they had a great bar tender and open bar. The drinks were priced really reasonably.

Sunday morning we awoke to blue sky and lots of sunshine. The glass fronted house we rented is about 300 feet above the beach and 200 feet below the launch. It was turning into a beautiful day. While we ate breakfast and cleaned up several pilots launched for sledders to the beach and the spot landing competition was underway. By eleven there were several bags and one hang soaring above launch. 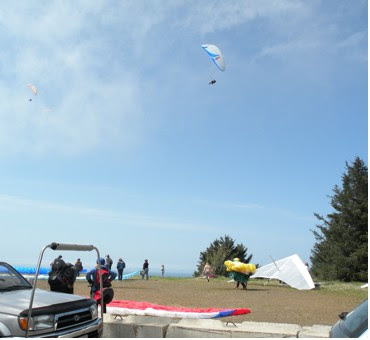 Eleven a.m. on launch at Maxwell Mountain, Oceanside, OR – Photo by John Kraske on May 3, 2009

On top of Maxwell, it was busy with not a lot of room to set up. It wasn’t long before I was in the air and going up. Lift was abundant, smooth, and easily found. Matt Becker followed George McPhearson south to Happy Camp and back. I climbed as high as I could get right off Maxwell and was following, but from a higher altitude. Since last years event I have often thought about jumping out over the Pacific and working the west facing dunes of Netarts Spit, south to Cape Lookout, but figured it would take a pretty strong west wind to fly these low dunes and the westerlies weren’t that strong on Sunday. At the highest point of the dunes between Oceanside and Happy Camp, just north of Netarts Bay I broke to the west-northwest and flew out over the ocean. I was hoping the forecast of stronger winds would kick in. Never did. I knew the tide was on the way out and looking down at the opening of the bay, only the narrow channel of Netarts Bay lay between a broad expanse of tidal barren sands between Happy Camp and the north end of Netarts Spit. The channel was surrounded by sand bars and shoals. If I lost too much altitude, I could land on a sand bar and hope for a boat rescue. Or I could opt for the spit and a really long and lonely hike to Cape Lookout. Some people travel from all parts of the globe just to hike along the beaches of the Oregon Coast and the ocean facing side of Netarts Spit is a pretty spectacular and abandoned 5 mile stretch of scenic wonder. From my altitude that I estimate was about 250 to 300 feet, I made a cross wind run for the spit, tacked across the sand point where I spooked a crowd of sun basking seals into a legless, fin flapping stampede. What was funny is how only about half the group rushed into the bay while the other half looked around, seemingly wondering what spooked their friends. By the sounds of these belching, grunting, basking critters you’d have thought they’d eaten at the Elks the previous evening. After a few grunts of wonder, a few looked up and reacted. That sent the remaining sunbathers rushing for deep water. Beeg Bird over beeg watta. From over the point of the spit, I put the wind on my tail and made a fast downwind run across Netarts Bay channel to Happy Camp where I found lift on the cliffs above the beach and worked my way cross wind back to Oceanside, benched up and over launch and flew for awhile more then attempted my first spot landing.

With an abundance of shuttle vehicles provided by our very gracious hosts, I was soon back on top and took Matt Becker’s younger brother Nick for a tandem flight. 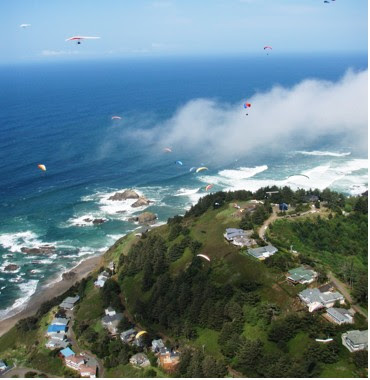 
Deanna Hutchison is a relatively new pilot who got some amazing photos and several firsts for her budding career as a bag pilot. See Paragliding Results.
Deanna Hutchison’s Glory Hole Photo from High over Oceanside – May 3, 2009 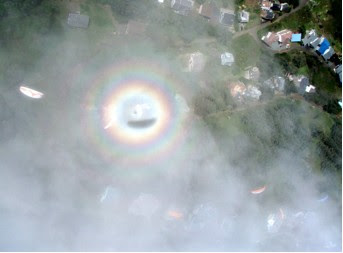 Here’s Deanna’s experience: The air on Sunday morning was nice and smooth with good lift. From launch I noted clouds forming as air was pushed over the ridge, and planned to stay below them. However, after getting into the air I noticed the clouds were forming cyclically and there was plenty of lift out in front of them so I started working my way up during a clear cycle. This was my first time above the clouds, and I experienced it with a bit of childlike wonder. I was fascinated watching the clouds form, starting as wisps and occasionally condensing into soft blankets. I had a neat moment when my view of cloud, ocean, and sky gave the illusion of being much higher up than I actually was – the phrase “on top of the world” came to mind. I worked the lift, and as the next cycle of clouds began to form I started catching incomplete images of the optical phenomenon “Glory of the Pilot” in the cloud wisps. For those of you who aren’t familiar with what a glory is (also known as Buddha’s Light), it’s a multi-layered rainbow ring that surrounds the silhouette of the observer. I had heard about this phenomena from a flying buddy who experienced it to his complete wonder, and shortly afterwards I got the chance to see it far below me during a commercial airline flight. Seeing it in free flight gave me a surge of joy. What a special treat! My thoughts went to my camera, but I was surrounded by enough traffic I wasn’t comfortable with trying to take pictures. So I set myself to the task of climbing as high as possible in the hopes that I would get another glimpse of pilot’s glory away from the heavy traffic. The air cooperated with me and the clouds continued to form below me as I worked my way up so that my next view of glory was solid and brilliant. Seeing myself in full glory for the first time I realized with some surprise that there was more than one ring of rainbows spreading out from around my shadow. This time I had my camera ready, so after a bit of gawking I snapped off a few shots with my little point-and-shoot and crossed my fingers that I had actually managed to capture the image. Apparently my luck held because I got a couple of decent pictures. Sadly, that was the last I saw of glory. I eventually decided to make my first attempt at long distance flying and headed south to Happy Camp. I didn’t go very far (2 miles and back), but I had a great time making the attempt and then scratching my way back up the coast to the main landing zone. All in all, it was an awesome flight of firsts for me. 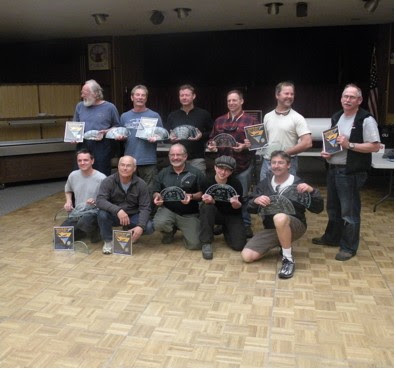 
Here are the Paragliding results by category:

*Dave flew at Sollie in Tillamook Valley. Flying from Sollie out to the Tillamook Cheese Factory and back again. He reported, “It was hard to stay down”.


Here are the Hang Gliding Results by category
SPOT LANDING

Every year that I’ve attended the Oceanside Open a good number of pilots choose to forgo this event because of what the computer weather models forecast. I’m wondering what it is that they don’t understand about springtime Oregon Coast weather patterns. You just can’t put’m in a box, especially if that box is a computer. This year I saw 100% rain forecast for both Saturday and Sunday. Some models forecast less; depends on where you look. The typical springtime weather patterns on the Oregon Coast often defy all logic of mankind’s oft lame attempts to put mother-nature in a box. 100% rain in a given 24 hours can be a pretty good guestiment and certainly satisfies our ego. That 100% rain might happen in just a fraction of that 24 hour period, or how history has proven; it might not rain at all. It doesn’t mean that we’re going to have 100% rain 100% of that 24 hour period. It’s springtime on the Oregon Coast and every Oceanside event I’ve attended over the years; I’ve flown despite the forecasts, if not at Oceanside, at one of the other numerous sites that surround the area.

Once again, the Oceanside Open has successfully kicked off my annual flying season. I’d like to extend a thank you to all those CPC and OHGA members for hosting this event, and a special thanks to Reed Gleason, CPC pilot extraordinaire, for saving the Oceanside launch from developers.
Posted by Steph at 9:07 AM

your pictures are beautiful, i can almost smell the ocean scent coming off of that one aerial by the sea. i wanna start taking up aerial photography on my runs but i dont have good enough camera!