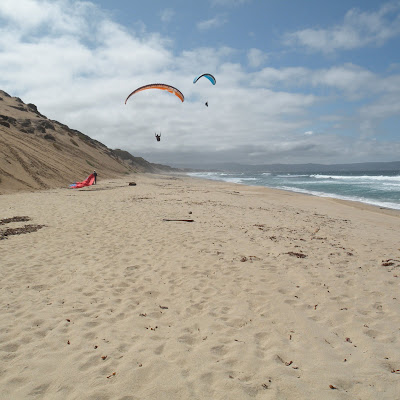 Ross J., Cort M., Mike F., myself and, of course Rick H. arrived in Marina Thursday afternoon. You'd have thought we were still in Seattle with the drizzle coming down. We were all jacked up to fly the dunes that stretch from Seaside (just north of Monterey), past the former Army post of Fort Ord, to Marina. We checked in the Holiday Express Motel in Marina and booked for the beach. It was drizzling and Ross was right, it was too light for my extra small Ozone Addict. A bit wet as well. Ross and Cort got a little soaring in and I sunk to the beach.

Back at the motel we stretched our wings out to dry. At least I didn't soak my medium Nivuik Artik. The weather forecasts for Friday were calling for more rain so we were quite surprised to awaken to blue sky. We all were under wing by 10 a.m. We parked at the far north end of the dunes where all pilots are required to register. Ross took off kiting his wing to the south and was e...ven...tual....ly air born - it was quite a task sustaining lift against these lower lying dunes with only about 8 to 10 mph winds. Cort was next to raise his wing overhead and I was soon to follow, wanting to get away from Rick's, "we should have gone to the regular launch...", bitching. Actually we should have listened to that Hubbard wisdom as I was huffing and puffing by the time I got into the air at some higher dunes, quite a kiting jaunt south. I was soon flying with Ross and another unknown pilot above the regular launch. The unknown pilot top landed and got drug into a large expanse of ice plants in the gully north of the launch. I flew around investigating the varying lift patterns before deciding to top land and talk to the guy who I assumed was a local.

Not. Dean, his wife and daughter were visiting from Colorado. Dean helped disable my wing as I was getting drug across the top of the dunes in an easterly direction. It was pretty obvious that then winds were picking up. We opted for the beach. By now Mike F. had driven our rental van to the normal launch. Did I mention we should have listened to Rick?

Ross took off towards Sand City, to the south where he had a close encounter with a well decayed, fly infested sea-lion on the beach. I launched from half way down the dune and made my way south about a mile and a half before turning back at the camera towers. I believe the two cameras are there to monitor anyone violating the fenced off cliff faces. Signs along these fences warn everyone to not disturb the bird nesting areas. Something new since my last visit and certainly a detriment to launching from beach level in the majority of this nine miles of dune. 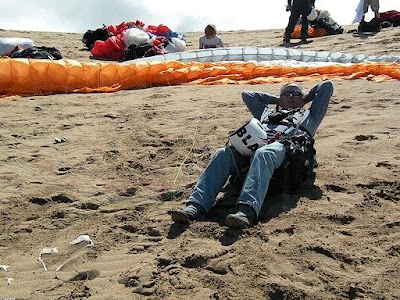 By noon it was well apparent that the winds were going to be nuking. Out on the bay white caps were becoming more and more active. We hung low, launching from beach level and staying low and out front. This is one of the few stretches that is open and not fenced. At one point we witnessed Cort lifting rapidly and being blown back where he was rescued by the resident ice-plant in the venturi gully north of the launch. He lived.

Later Cort got on my x-small Ozone and soon was ripping up the wind, keeping low and fast. Very sporty flying that little thing. A real hoot, like flying a racy little sports car instead of a boaty pickup truck. This "beach wing" I bought from Meridith a few months ago. 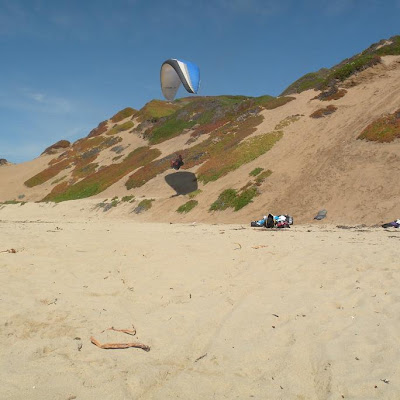 Cort takes to the air on John's x-small Ozone Addict.

We had a ball on Friday and were all pretty much worn out by the time the winds got too strong, even down at beach level. At the top of the dunes in must have been blowing 30 knots. We were well sand blasted on our way to the van.

Saturday we were a little more optimistic as the winds were forecast to be less than they were on Friday. We packed our guts at the motel free breakfast feast. Not too bad for eggs, bacon, biscuits and gravy...and of course our packed lunch of bananas, bagels, cream cheese, sausage. Look out LDL, you're on the rise!

A quick stop at a local espresso, Coffee Mia I believe it was called, where the barista wanted to know what happened to the other guy. "Ross? Oh, he got para-dragged into a fly infested sea-lion and we had to leave him on the beach." I reported.

"I don't want to know the details!", responded another espresso customer.

"It was a very intimate moment for him." I countered. "We don't like him anymore...ah...but we'll miss him."

This time we listened to Rick and drove to the regular launch. Actually we didn't listen to Rick so much as Rick was driving and not listening to us. All of us were soon in the air. Immediately I took off for the south, hoping to get out and back before the winds came up too strong. No one followed and it was a long and lonely flight to Sand City. I could see whitecaps on Monterey Bay so kept testing my forward penetration to the west, being cautious to not get too high. When I felt too much lift I would fly out over the surf, lose some altitude then fly back downwind to the dune faces and recapture the ridge lift. I continued my zig-zag course to the south and finally lost all my lift at Sand City where I went for a vigorous dragging up the shallow sloped dune before gaining control of my wing. My boots and every orifice was packed with sand. The winds were now too strong to attempt much of anything. I untangled seaweed and ice-plant from my lines, emptied sand from my wing.

I was considering packing up and hitchhiking back to launch when I noticed a couple paragliders flying the dunes in the far distance from where I had come. Looked like Ross and Cort. So much for packing up. I took to the air at the base of a shallow dune and proceeded to work my way back, cautiously staying low and out front. 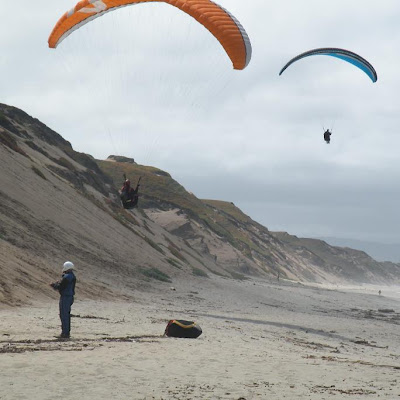 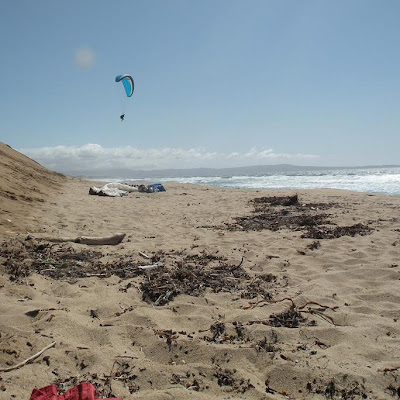 Ross staying low and out front.
A shallow ridge of sand, created by the punishing surf created some interesting lift off the shallow beach, about 20 to 100 yards west of the dune faces. This ridge helped my ride home. Because the wind velocity was fluctuating from 15 to 20 plus, it was an interesting 2-hour struggle. In a few places along the expanse of sand dunes there are some canyons with gaping hungry looking mouths. These venturi monsters are like giant vacuum cleaners that want to suck you in and back. Been there before. I think Ross was snacked upon three or four times on his attempts to fly south the day before. I kept recalling the Lust Lizards of Melencoly Cove*. It's best to stay clear of these by either fly high over them or way out in front of them. Landing in front of them is like offering up yourself as a snack.

About half way back I began seeing the hangies. They were coming out in force, sleek fast devils that they are. Some of them would just stay put hanging suspended in the air above a certain dune; parked in winds much too strong for bags.

I continued kiting my wing when I could, being careful to not violate the fenced bird nesting areas, the watchful cameras from the dune tops threatening my compliance. Sometimes I was able to let my wing and strong winds sand surf me along in the direction I dictated. Like making first tracks. 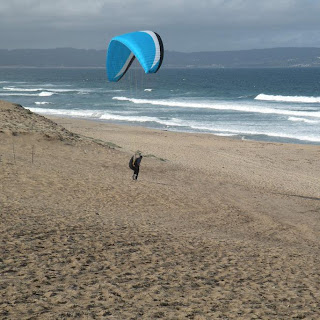 A few times I wasn't so lucky. A couple times I wrapped my wing on the bird fence. Finally I reached an unrestricted dune face and was able to get up in the air. By the time I reached my destination, Rick, Ross, Cort and Mike were all sand lounging and the wind had dissipated to a manageable level. Time to have fun. The boys joined me and we had about a half hour before the wind picked up again. We played our butts off. The winds switched to a manageable cross from the south which made me a little skeptical about horizontal rotor. I landed and folded up. By the time we had all packed up the wind had switched back to the west and began nuking. Nice to have a little help from the wind as we climbed up the steep faced dune, up and over the top. At the top it must have been 30-40 knots.

We headed back into Monterey for dinner. Our second go at the Italian Trattoria Parimiso. Pretty busy, relatively affordable and some pretty good eats. Their famous $2 shrimp cocktails are pretty good. If you order off the local menu you get several courses and much more than I can eat. Our first night, Thursday, we went to a place we remembered in Marina. We thought of it as the Cowboy bar. I recalled their calamari steaks as being "the best". Well they're under new management and it's now some kind of Hawaiian place. They were busy, but we all found the cuisine to be expensive, and lacking at best.

Ross and Cort are off for some morning flying at the beach. They just got back as I sit here pecking away. "How was the flying, light, strong?" It was guise to find Ross' lost camera. "Didn't find no camera.", said Ross. "Got a couple in.", said Cort.

My synopsis: First I'm concerned that I maybe over the Alaska Airline weight restrictions with all the sand I picked up in my gear. We all are tan, stiff and sore. We all are wearing smiles and ready to take off on Rick's next flying mini-vacation. Ross still has that rotting sea-lion ambiance about him.

*THE LUST LIZARD OF MELENCOLY COVE, by Christopher Moore (a must read)

All photos courtesy of John Kraske. Maybe someone will take HIS picture next time??
Posted by Steph at 9:30 AM

I enjoyed reading that. I cant wait to get to the beach!

Sounds like a lovely day to spend on the beach! The pictures are wonderful!