by David Byrne and Kingsley Wood

The week after the Chelan XC competition in Washington last August, a group of paraglider designers from South Korea met with a team of Boeing’s aeronautical engineers and some software specialists from Microsoft to create the next generation of high performance paraglider designs. This meeting was a landmark event which brought together the top talent from each industry for the sole purpose of advancing paraglider evolution. Their surprising conclusion is that the past informs our future, and that we may all be gliding around on modified bi-plane type gliders in the not to distant future! 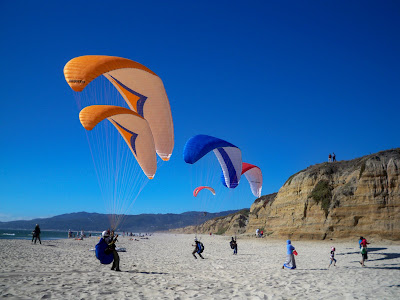 Microsoft’s programmers created a genetic algorithm to optimize the airfoil and ran over 500 million mutations on the “cloud” computers at Amazon Web Services. Next, they tweaked the lines of code in Boeing’s Aeronautical CAD program and preloaded the resultant algorithms into the menu selections so designers could easily edit all the individual parts of the glider and then simulate those changes in a virtual environment to achieve the best flight characteristics. Working with the Boeing’s Joint Strike Fighter jet engineers led the paraglider designers to consider the use of a canard wing as part of the overall design to help stabilize the gilder in flight, particularly at high speeds and in turbulence.

The new glider is made with Porcher Skytex, and uses classic diagonal segment construction on both wing surfaces. The lower canopy acts to provide additional bracing between the segments of the upper canopy. This distributes load and power evenly throughout the upper canopy, thus, the two wing sections act in tandem to provide a high level of stability, particularly when climbing in thermals. There are four risers, each with three main lines. What is unusual is that the top surface of the lower, or “canard” wing, provides most, but not all, of the attachments for the upper wing. The third line on the fourth, or “D” riser is attached directly to the trailing edge of the main canopy. This allows designers to build both wings with higher aspect ratios than would normally be considered for single wing gliders. It also provides the pilot with a direct means of control over the upper canopy and is vital for precise turning and landing. Because the canard canopy is smaller, similar to a speed glider, it has only 41 cells while the upper canopy has 61. Additional Edelrid “cross lines” are used between the additional cells in the upper canopy and are routed internally so they have no negative impact on the aerodynamics of the upper wing.

Gliders with a high aspect ratio are generally tricky to launch. This is not the case with a canard design. Shorter line lengths to the first canopy give the pilot an unprecedented amount of control when inflating the glider, wing reactions are immediate and precise. As the canard wing inflates, it provides an equal amount of tension on the lines leading to the upper canopy, steering it evenly across the entire span and cleanly over the pilot.

In flight the new glider is a pilot’s dream come true. The canard design allows the construction of a glider with a very high aspect ratio and significantly better glide performance. The canard wing also provides sufficient lift to negate the line drag found on standard gliders. The cell openings of both wings have been optimized by the addition of a vector band on the lower surface to add rigidity to the leading edges and provide stability at high speed.

Because the two wings are inherently more stable, this glider turns flatter in rising air and thermals more efficiently. High bank angles were not easily achieved on the solo or tandems wings because of the inherent stability, so the team has altered the original design on the acro prototype shown below. 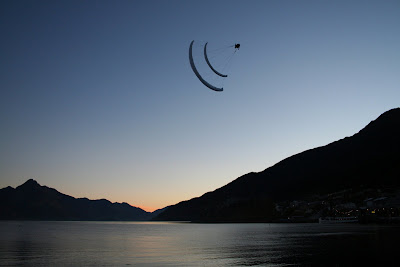 With a top speed of 65 km/h, and a glide ratio of 10.5:1, this wing should appeal to competition and cross country pilots alike. Test pilots who have flown the prototypes remarked that they no longer feel at home on mono-wing designs. One of the Turkish test pilots, Epril Faloul, had this to say: “Once this technology reaches the rest of the paragliding community, our sport will never be the same”. 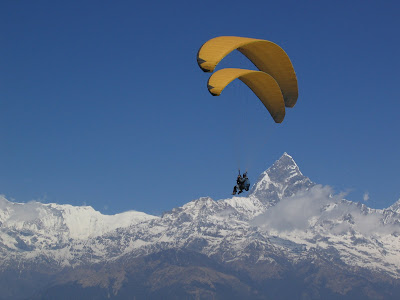