With my business completed in Seattle and a nice high cloud base out over the Olympic Mountains I thought I might get a sledder in at Tiger on my way to my 5:45 client in Snoqualmie. I could make the two o’clock shuttle. Who knows it might just be one of those lucky days you might just pull out a nice soaring flight. It was warming up and the winds were predicted to pick up from the south. Might be some good ridge soaring in the bowl left of launch.

A few hardy souls had hiked up earlier and were launching south by the time I arrived at the Tiger LZ. The ground winds were light and variable. I watched as Conrad had a pretty good flight across the valley and over Squak’s east flank. He was getting worked and cut his flight short due to “weird air”. 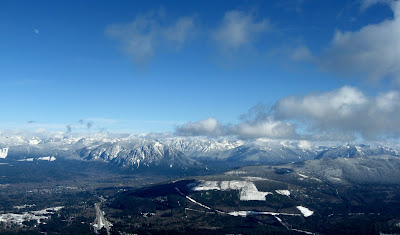 The two-o’clock shuttle departed at two-thirty with Bob Hannah providing his driving expertise. Several pilots opted out of the ride up so there were only three of us onboard. Nearing launch we could see a wing high above launch. Heather looked to be having a fine time approaching cloud base. I was enthused.

At launch we were quick to layout and clip in. Heather was at cloud base and soaring to the north. The 8 mph south wind disappeared just as I was set to go. The wind sock above south launch was displaying what might be thermal influence, indicating west, then northwest, then nothing at all. Maybe the wind direction was getting ready to change. What happened to the forecast of strong south? I finally choose to pull up in a barely discernable trickle of air coming up the south face. I dove into my chest straps and glided away to the south, leaned to the left and my vario began “beep…beep…beeping” as I slowly ascended into a right-banked turn toward the west ridge. As I approached the ridge the beeping of my vario steadily began a higher frequencied scream. “Oooooh, this is good.” I thought. Scanning the north I looked for Heather but she was not to be seen. “Probably landed”, I thought. There was lots of open blue with broad flat cummies forming over the valley at about four grand and I was going up at an amazingly rate of climb, getting awfully close to an IFR situation. I chose to run for the blue to the north, between couples of broad forming cummies, on ears to slow my ascent. Even on ears and in the blue I was still going up faster than I wanted. Glancing down at launch the other two pilots were still laid out and it looked like the wind sock was indicating east wind. I wanted down, being somewhat concerned about rotor forming in the valley. Lift seemed to be everywhere. I reversed my course to the south hoping to break free of the valley’s up influence. Other than two aerobatic ravens displaying their far superior and raucously good fun in the rising air, I was the only wing in the sky and glad of it. I kept nervously glancing to the north and east imagining a FedEx or UPS inbound flight on death mission and wondered how visible I would be this close to the rapidly forming clouds. The wind sock still looked to be poking straight out from the east and I was still going up. I pulled in bigger ears and my shoulders were starting to ache and my outside A-lines were stressing my gloved fingers. Just a little southeast and high above Fraternity Snoqualmie, I began to experience some down. I leaned into my turns and was soon no more than a couple hundred feet above launch, but experiencing some of the “weird air’ Conrad had early reported. I let out ears and continued my descent to the LZ, staying closer to Squak than Tiger, paying close attention to keeping my wing inflated. The wind socks and streamers in the landing zone were all over the place with not much definitive wind direction. I came in high and banked my touch down from north to southwest. I was happy to be on the ground and pretty darned satisfied at having had a successful soaring flight despite being challenged and downright concerned - a very humbling experience.

As I folded up and prepared to depart Conrad pulled into the parking lot. He had gone on fetch and picked Heather up who had landed in the soccer field at Lake Sammamish. She too was all giddy and smiles. It was definitely nice to have had a soaring flight after such a long arduous winter off. In retrospect, Heather’s choice of an lz was probably a much wiser decision than landing in the valley considering what the wind sock at launch was displaying.
Posted by Steph at 2:02 PM