It’s January. We’re over the hump. Days are getting longer and it’s time to start thinking about the Annual Oceanside Open Fly-In. This is what I mark as the true beginning of the Northwest flying season. This year’s event is scheduled for the weekend of May 2, 2009, a little later in the spring than previous years. 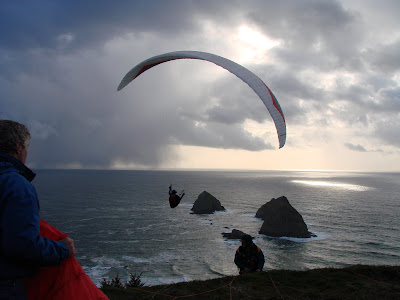 Last year a lot of my flying compatriots checked the weather forecasts and opted out because of what they saw on the computer weather models as 60% chance of rain. They missed some fine flying.

The northern most seventy miles of Oregon’s coastline are my favorite haunts throughout the year; winter, spring, summer or fall. I absolutely love this area and all it has to offer. From the mouth of the Columbia River to the mouth of Nestucca Bay the scenery is breathtaking. Of course this coastline is longer than seventy miles by road, the seventy miles I refer to are “as the crow flies” - a straight line of longitude from Astoria south, a line of flight. I fly.

Unfortunately I don’t fly as efficiently as that proverbial crow or any other winged creature. Paragliding is my passion and this upper reach of the Oregon Coast offers multitudes of opportunities for the pursuit of my favorite way to dance with mother nature, especially when the weather forecasters predict southwest to northwest winds and, as often as not, somewhere in the range of sixty percent chance of rain. The rain usually arrives in cells known to mariners as squalls. These wind driven clusters of rain often push high winds in front of them. Once on-beach they dump their load, often stilling the effects of wind then move inland leaving behind lighter winds that are flyable. I refer to this as “squall surfing”. Of course, with approaching squalls, it is important to time one’s descent to beach before the squall driven wind arrives. I carry a large garbage bag I can stuff my wing in to keep it dry. If I feel a significant increase in the wind velocity, I know it’s time to “beach and bag”.

In my seventy mile haunt of coastline, Oceanside is roughly three quarters of the way south from the Columbia River. Last year on the first day of the Fly-In the winds were a bit too strong for Oceanside. I booked south to Tierra Del Mar, a seventy foot west facing launch that can access hundred foot high dunes that run about a mile and three-quarters south to Cape Kiwanda. 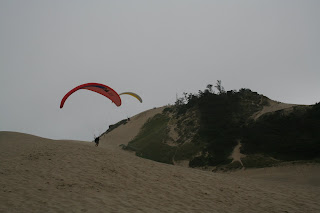 Soaring Cape Kiwanda. About a half hour drive south of Oceanside. Photo by John Kraske 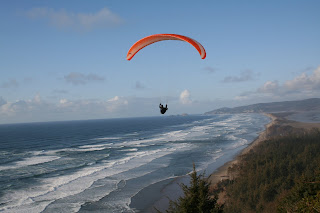 Steve Forslund flying north towards Oceanside from Cape Lookout. You can see 3 Arches in the distance which is just offshore of Oceanside. Netarts Bay is to the right of the sand spit that separates the bay from the Ocean. The mouth of the bay is to the north. Across the spit is Happy Camp, an out and back destination from Oceanside. Cape Meares lighthouse is about 2 miles north of Oceanside and is also an out and back destination. Last year Joe Evans flew his Hang Glider from Oceanside to Cape Lookout and Back. With strong west winds and the right approach I think it can be done on a bag. The low west facing dunes run from the mouth of Netarts Bay approximately 5 miles to Cape Lookout. That’s a total of 8 miles from Oceanside. Photo by John Kraske 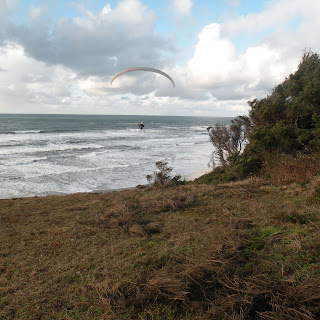 The winds were too strong there as well. I continued south to Bob Straub State Park where some lower dunes span south for four miles from Cape Kiwanda along Nestucca Spit. We “squall surfed” for several hours before heading back to Oceanside. The westerlies were dialing down and Oceanside was on. Several pilots were soaring high over launch, pushing north to Cape Meares and south to Happy Camp. One hang glider flew south to Cape Lookout, approximately ten miles. 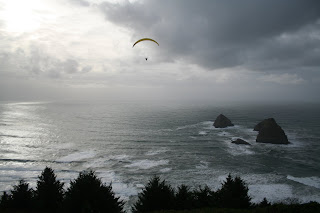 Soaring above the Three Arches at Oceanside. Photo by Debi Hoffman

If the conditions this year are similar to last year, my goal is to cross the mouth of Netarts Bay from north of Happy Camp and scratch the west facing dunes on Netarts Spit to Cape Lookout. There are some significantly larger dunes at Bay Ocean, 5 miles north of Oceanside that are awful inviting on a west wind day as well. Bay Ocean is a 4.5 mile spit of land that makes Tillamook Bay a bay.

To my friends who missed last year at Oceanside: “Don’t let those computer weather models fool you. West winds with sixty and even a higher percentage of predicted rain can still produce some really fine flying on the Oregon Coast. There are lots of options.”