Ah the time has come for my turn to write up the goings on for the club this month and what goings on there has been! The absence of a Prez-Sez last month was down to the fact that our chirpy little Texas whirlwind Gordon has been too darn busy flying all over the place to be able to pen to paper or so it seems!. Hopefully I can make up here by jotting down some memorable moments of the last couple of months and praise some of his and other ilk's who have taken to the Badly passage and other wonderful XC tales.

The season has started very slowly this year as we all have witnessed. Of course,  there has been the occasional  gasps of "Wow, seriously, he went to North Bend with a cloud base of only 3500.." but yes it seems if you can time it right and get out during the weekday there have been some great flights.

Heather St. Clair flew a personal best to Coulee Dam launching from Chelan and even got into the top story for the local newspaper. 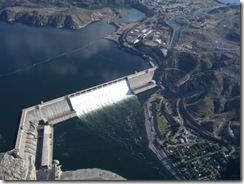 The hard XC crew of Chris, Conrad, Dave, Gordon, Joe, Matty, Mereydth, Randy and  Steve have been flying all over the place with personal bests for many of them. Most notable for me was Steve's 6hr 20 minute 114 Mile flight from Baldy....just love watching that flight in google earth to someday hope I might reach 100. A lot of new students like Lisa, Paul have also been setting some personal bests getting to 5500 ft cloud base on flight 6 and 17 respectively. Even our ever smiling Stephanie Hicks has been kicking butt with just 50 flights and has probably flown in more countries than many of our long standing pilots. The last 6 weeks has certainly seen some great moments and I am sure there are many to come. I even managed to land out South at Hobart for the first time in 2 years flying and that was my personal best flying south.

Following on from that, The West Coast Paragliding Championships have just finished down at Woodrat and the North West pilots once again showed their muster with Andrei, Meredyth and Dave being placed 11th, 19th (4th) and 22nd (10th) from a top class field of 46 in the overall open class and being placed much higher in the serial class, shown in parenthesis. And for those that haven't heard, Meredyth won the woman's class, awesome!  Congrats all around to those that competed and hopefully the new rats going to Medford in July can learn from some of these great pilots we have in our local community and keep up the strong presence the NW pilots are showing in comps.

Back on the home front, at long last work has started on Tiger road repairs. There have only been some minimal disruption to Mike's shuttle service during the week when new culverts were being installed under the road in the areas where we we have all witnessed washout. Hopefully when these are done we may see some grading on the rougher areas.

For those that didn't fly yesterday (20th June), it was the longest day of the year. Summer officially has started!!!  As I arrived at the LZ I saw Kiro tv trucks in the parking lot and more people in the LZ than I can remember for some time. Families were also playing in the park and having a good time. My first thought was who has gone in the trees this time! Funnily enough at that point in time no one had so what was all the commotion about? Turns out that some families in the local neighborhood have been getting annoyed at the amount of congestion on the road. They believe this is due to our paragliding activities where rubbernecking during busy summer days holds up traffic and causes potential safety issues. Later after landing I had a good conversation with one of the protesters (his term not mine). He is part of the family that owns the large property out at Highway 18 where the big red barn is. Apart from his issue with traffic, he reinforced the point that their family doesn't like folks landing out there. Another incident happened a week ago which seemingly was the catalyst for the organized event yesterday.

So folks, if you do need to land out and have planned going XC please be aware of all the local landmarks where paragliders are not welcomed. Yes we all know you can land anywhere in an emergency, but we don't have to antagonize folks unnecessarily . The club did start pulling a map together of these areas but I am sure many folks have forgotten where they are since last year. I will bring this up at the next club meeting as something we should remind folks about.

Finally to finish with, I believe we had our first two tree incidents of the year? New student Ryan went into one off off launch just last night, wasn't injured but had to leave his wing up there for the night.

And Gator a new student made it all the way to Kiro Tv last weekend. . For those that want to see some smiling faces just look at the video.

Until next time, Safe and Happy Flying